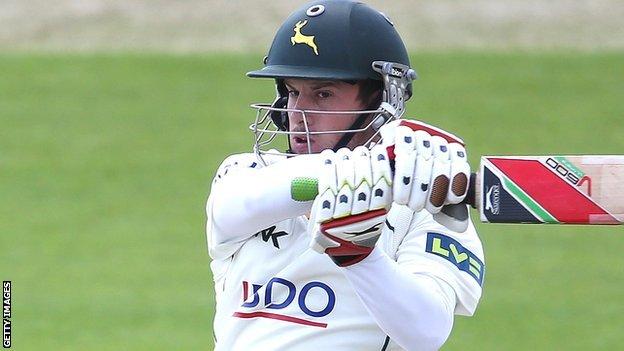 Steven Mullaney's half century helped Nottinghamshire out of trouble on day one against Surrey at Trent Bridge.

Mullaney (68) and Ajmal Shahzad, who scored eight in 97 minutes at the crease, helped Notts close on 273-9.

The home side, who made a slow start in the morning session, had captain Chris Read ruled out with a neck injury, missing his first Championship match since September 2006.

Hales lost his middle and leg stumps to a fuller ball from Dernbach in the third over of the day, while Australian Ed Cowan was caught on his crease and bowled by Meaker for 15.

Lumb mistimed to Linley at mid-off before Taylor - Nottinghamshire's leading run-scorer in the Championship this season - and Patel set about rebuilding the innings and put on 60 for the fourth wicket in 14 overs.

Both Patel and Taylor, who captained Notts for the first time in four-day cricket, fell to Linley, while Meaker got rid of Wessels and Paul Franks cheaply.

Shahzad and Mullaney dug in and built a 66-run partnership for the eighth wicket, before the latter's 84-ball stay came to an end when he was caught behind by Steven Davies off Dernbach.

"A compelling day of cricket brought a terrific fightback by the home side after they'd been put under the cosh by a very disciplined and pacy Surrey attack.

"Steven Mullaney again showed his worth with the bat, making useful runs - as well as shepherding the lower order towards a respectable total.

"One must feel for Chris Read, who is absent with a stiff neck. This match would have been his 99th consecutive County Championship appearance."

"Surrey's bowlers had a productive day at Trent Bridge but, thanks to Steven Mullaney, Nottinghamshire fought back in the final session.

"Tim Linley was the pick of the bowlers and he was closely followed by Stuart Meaker.

"Surrey may be left with the feeling that that it could have been an even better opening day, but it was still a good one for their bowlers."