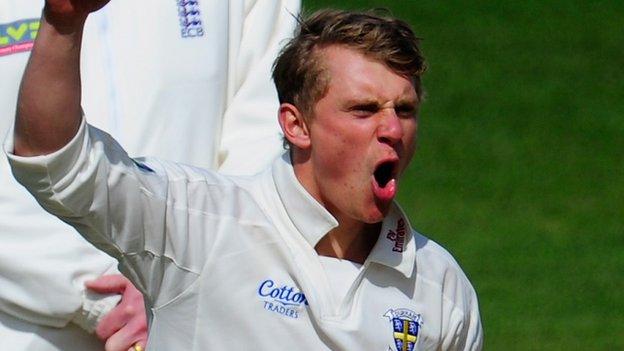 Durham kept their nerve to beat Surrey and move to the top of the Championship table after career-best bowling by Scott Borthwick at The Oval.

Leg-spinner Borthwick claimed 6-70, for match figures of 8-92, as Surrey were all out for 229 on the final morning.

They suffered a wobble either side of tea, but 35 not out by Ben Stokes saw them home by five wickets on 181-5.

All three results were possible at the start of play, but Durham were eager to clean up Surrey's second innings as quickly as possible to avoid a sizeable run-chase on a turning pitch.

They were kept waiting as Gareth Batty (27) and Gary Wilson (26) added 46 to take the total past 200, but once teenager Ryan Buckley won an lbw decision against Batty, the end was swift.

Borthwick removed Wilson with the help of a sharp slip catch by skipper Paul Collingwood and then held two diving chances off his own bowling offered by Stuart Meaker and Tim Linley as Surrey were all out for 229.

Durham soon lost Will Smith in reply and after Borthwick was leg before to off-spinner Batty, three wickets went down for 19 runs to leave them on 126-4.

Paul Collingwood was bowled by a ball from Gary Keedy that turned and bounced soon after tea, but Stokes stayed calm and sealed Durham's third win of the season with two consecutive boundaries off paceman Stuart Meaker.

"Durham deserved to win this game and Surrey will reflect on their collapse after tea on the first day as the critical period.

"To go from 221-4 to 237 all out is very difficult to recover from and Durham were always in control from that point.

"Surrey will have to regroup very quickly because their game against Nottinghamshire, starting on Wednesday, is now very important."

"What a win this was for Durham and after five games they are at the top of the table.

"Surrey did everything they could to prepare a spin-friendly wicket and some key decisions did not go Durham's way, but they battled on and produced a fantastic win, their first at The Oval.

"They went into the game without Graham Onions, could not bowl Ben Stokes because of a back injury and had to call-up a 19-year-old debutant spinner in Ryan Buckley - and still they won it.

"It was a cracking performance."