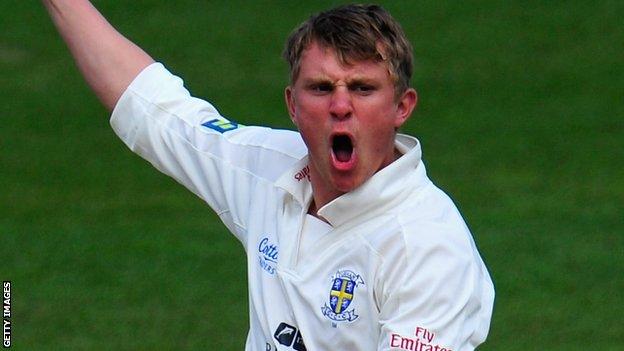 Scott Borthwick took three wickets as Durham had Surrey on the ropes before rain caused an early end to day three.

Starting their second innings 49 runs behind, Surrey lost Jason Roy early when he was bowled by Callum Thorp.

They struggled to build partnerships, aside from a stand of 51 between Vikram Solanki and Steven Davies, as wickets fell regularly on a rain-disturbed day.

Davies was well set on 46 but as clouds gathered overhead, he edged Borthwick's spin to slip as Surrey closed on 164-6.

After Thorp had sent Roy back to the hutch, the lbw well and truly took over as Arun Harinath, Rory Burns, Solanki and Zander de Bruyn were all dismissed in that fashion, Borthwick striking either side of Mark Wood and Paul Collingwood.

There was still time for Borthwick to snaffle Davies four short of his half century and Surrey reached stumps with a 113-run lead.

"It is all set up for a fascinating final day.

"There is enough happening to keep the bowlers very interested and both sides will still fancy their chances of victory."

"The Surrey fans I spoke to here think the rain has staved off an inevitable defeat yet the Durham supporters, and Durham coach Geoff Cook, do not share that view.

"The reality is that this one is evenly poised and if Surrey's last four partnerships add 30 to 40 more runs tomorrow and post a lead of 160 to 170 this will be a tough one to call.

"Spin has dominated so far with 15 of the 26 wickets falling to the spinners."