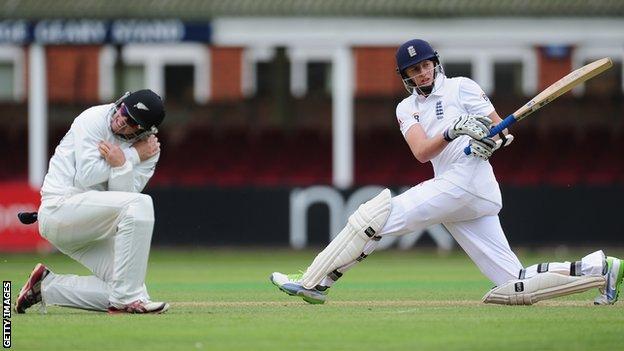 Captain Joe Root made an unbeaten century as England Lions took control of their tour match against New Zealand on day two at Grace Road.

Earlier, the tourists lost their last seven wickets for 74 runs to be bowled out for 285.

Hamish Rutherford was run out for 126, with Toby Roland-Jones taking 4-54.

The Kiwis had begun on 184-3 after having the better of day one, but slumped on the second day in their final warm-up game before the first Test, which begins at Lord's on Thursday.

Root, who looks certain to be named in the England squad when it is announced on Saturday, survived being dropped on 23 by Black Caps skipper Brendon McCullum off Doug Bracewell, while Trent Boult had a good shout for lbw against Root when he found some swing.

The 22-year-old Yorkshire right-hander rebuilt the innings alongside Hampshire opener Carberry after Varun Chopra was caught by McCullum off Tim Southee for four, with Root passing 500 first-class runs in only his fourth innings of the season.

"He's just in great form at the moment," said Carberry.

"'Chops' got a good one early doors and I set my stall out to try to consolidate the innings and blunt the attack, and scoring got a little bit easier once you got in."

The pair were increasingly authoritative until left-hander Carberry picked out Rutherford at deep square leg off the left-arm spin of Bruce Martin, leaving night-watchman Chris Wright to see Root to his hundred before the close of play.

"As a professional, who's been around the game a long time, I've always prided myself on kicking on from 60s and 70s and making it into hundreds," added Carberry.

"So I'm a little bit disappointed at maybe half a job done."

Rutherford had added 10 to his overnight 116 before he was run out by Chris Woakes's direct hit, with Dean Brownlie's unbeaten 42 the only other resistance put up by the tourists.

McCullum's first innings on tour lasted only four deliveries before he poked Graham Onions to gully and, after Woakes, Ravi Bopara and Simon Kerrigan picked up a wicket each, Middlesex seamer Roland-Jones mopped up the tail.