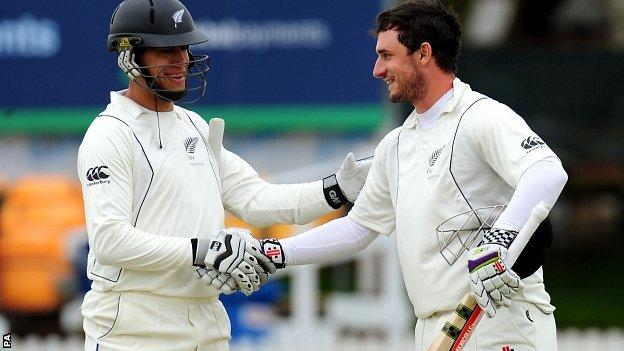 New Zealand opener Hamish Rutherford hit an unbeaten 116 on day one of the four-day tour match against England Lions at Leicestershire's Grace Road.

Rutherford, who made a century in his first Test innings against England two months ago, steered his side to 184-3 at the close of a rain-hit day.

Toby Roland-Jones took two wickets and Graham Onions one but Joe Root's side were unable to dismiss Rutherford.

New Zealand face England in two Tests, with the first at Lord's from 16 May.

Rutherford's 110-ball century contained 15 fours - 11 in his first 50 - and he hit four sixes in his innings, the third clearing Onions at long-on to take him to three figures.

Lions skipper Joe Root chose to bowl first on a green-looking pitch, but there was little evidence of lateral movement.

Rutherford's opening partner Peter Fulton lasted only until the seventh over before Onions had him lbw aiming to his favoured leg-side.

Chris Woakes dropped Kane Williamson at gully off Onions, but the number three soon departed, when he pulled a short ball straight to midwicket in Roland-Jones' first over.

Rutherford cashed in with three successive off-side fours off Toby Roland-Jones when the Middlesex seamer strayed with both line and length and reached his 50 with a back-foot boundary past cover off Chris Wright.

Former captain Ross Taylor was less adventurous but helped Rutherford put on a stand of 127 either side of lunch.

The afternoon session was delayed by rain, but when play resumed Rutherford decided to take on left-arm spinner Simon Kerrigan.

He was up the wicket to hit the young spinner's second delivery for a straight six and, after Michael Carberry dropped a tough chance at deep midwicket to reprieve Rutherford on 85 in Kerrigan's second over, he responded in the next with three sixes.

The first was held at long-on by Onions but carried over the boundary - a fact confirmed when the fielder checked the opinion of adjacent eye-witnesses in the New Zealand dug-out.

Onions had no chance with the next, struck high over his head, before Rutherford celebrated his century with a flat six just the other side of the sightscreen.

Roland-Jones returned for only his fifth over and trapped Taylor lbw shortly before more rain brought an early tea and wiped out the evening session entirely, with new batsman Dean Brownlie four not out.