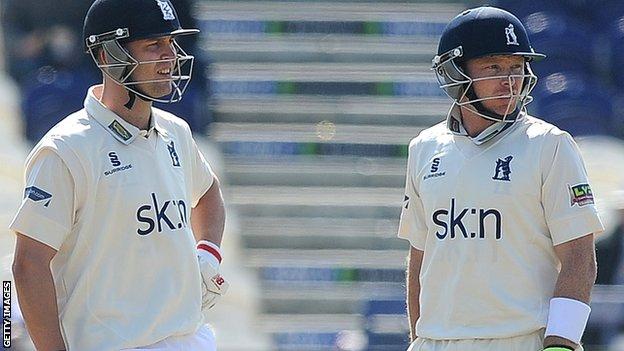 Jonathan Trott and Ian Bell scored half centuries for Warwickshire against Middlesex ahead of next week's first Test between England and New Zealand.

Middlesex declared overnight on 428-5 and Laurie Evans (59) gave the hosts a solid start, before he retired hurt with a broken bone in his hand.

Tim Murtagh claimed the other two Warwickshire wickets to fall, getting rid of Trott and also Bears captain Jim Troughton for a third-ball duck.

Trott's half century was his first at Edgbaston in three years but bodes well ahead of next week's opening Test of the summer at Lord's, especially as he made 96 against Sussex at Hove last week.

Bell's 105-ball knock contained eight fours before he was out trying to work former Warwickshire team-mate Collymore off his legs.