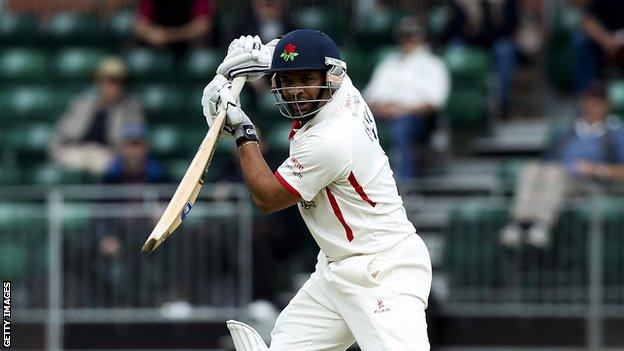 Lancashire completed an incredible three-wicket victory over Essex with just one ball to left to play.

However, Ashwell Prince and Karl Brown (both 80) began to make fine strides towards the visitors' total.

Three wickets fell with 10 runs needed, before Wayne White was dropped on the penultimate ball but the single was enough for the win, with both sides deducted one point for slow over rates.

White's winning run was spilled by former Lancashire man Saj Mahmood in one of the most exciting finishes of the season so far.

Essex's declared before the final day's play as rain delayed the start until after lunch.

The Red Rose's reply began in disarray with Luke Proctor and Paul Horton falling to David Masters and Reece Topley respectively, leaving them staring down the barrel at 13-2.

However, Prince and Brown steadied the hosts, before their 169-run partnership was brought to a halt when Prince was bowled by Topley leaving them on 182-3.

Croft (28) then fell with five runs off 10 balls needed after a diving catch by Rob Quiney - who injured himself in the process - and when Gareth Cross and Katich (26) followed in the same over, Lancashire appeared to be on the ropes.

But White, alongside Kyle Hogg, needing five from the last over from Graham Napier, held his nerve to give Lancashire a victory in dramatic circumstances.

"We're in the business of winning games of cricket. We could have just batted out the day for a boring draw, but it was out duty to put on a show.

"Some people will say it was a generous declaration but we felt we could bowl them out. We've dominated this game for three days, and but for the weather I think we would have won. It's a cruel game sometimes.

"You have to be brave with your decision making and James Foster and I talked about the declaration for 20 minutes and everyone agreed it was the right thing to do.

"Credit to the third-wicket partnership for Lancashire as that swung the game."