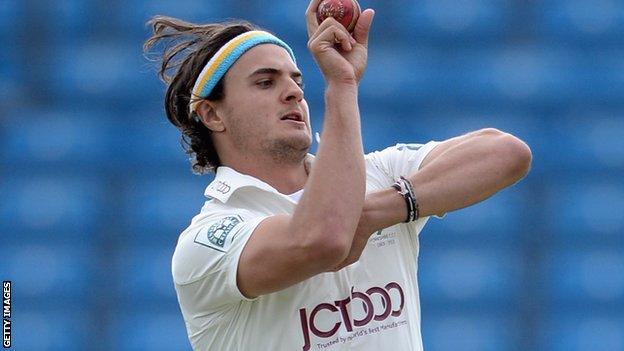 England's Nick Compton was out for a duck as Somerset clung on for a draw in a dramatic finish against Yorkshire.

Play did not begin at Headingley until the afternoon because of rain, but Yorkshire earned maximum bowling points by dismissing the visitors for 252.

Tim Bresnan took 4-76 and, leading by 253, Yorkshire enforced the follow-on.

Compton quickly fell to Jack Brooks, who took 4-22 before injuring a finger trying to field off his own bowling and the game ended with Somerset on 61-6.

Only 26 overs had been possible on day three, making a draw the most likely outcome.

The loss of the morning session seemed to provide further insurance against possible defeat for Somerset, who were 190-5 overnight.

When play finally got under way, Steve Patterson had Jos Buttler caught behind for one with his second delivery and then added the wicket of Peter Trego after all-rounder Richard Pyrah had James Hildreth caught at point for 39.

Alfonso Thomas (26 not out) and Steve Kirby (15) kept Yorkshire at bay for 16 overs, before Bresnan removed the latter and Jamie Overton with successive balls after a brief rain interruption.

With the first Test against New Zealand only six days away, Compton could have done without a nought against his name, but he was snapped up off the sixth ball he faced by Adam Lyth, and Brooks followed up that success by removing Alviro Petersen and Hildreth, who was bowled for 12 after hitting three fours earlier in the same over.

Arul Suppiah suffered the indignity of a pair when his off-stump was knocked back by Brooks before having to go off in the middle of his next over for treatment to a suspected dislocation, suffered as he tried to stop a drive by Buttler.

Somerset's discomfort was not over, however, as Patterson had Buttler caught and Trego lbw before Yorkshire finally ran out of time in their attempt to force an unlikely victory, with Marcus Trescothick, who had witnessed the tumble of wickets from the other end, remaining unbeaten on 33.

"What a finish! Yorkshire so nearly pulled off a famous victory.

"That they did not do so was down to Marcus Trescothick's calm and assured captain's innings, while wickets were falling all around him - four of them to Jack Brooks, who bowled superbly before going off with an injured finger.

"Yorkshire were much the better side and Somerset have some serious thinking to do."