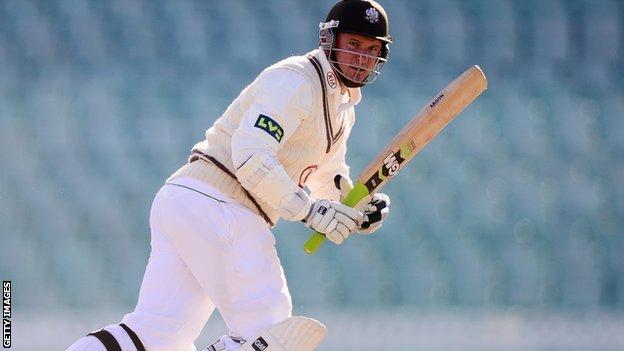 Surrey captain Graeme Smith is to return home to South Africa for ankle surgery, with the county saying he will be out of action for "a few months".

That means the 32-year-old, who also captains South Africa, looks set to miss the Champions Trophy.

"To have to head home so early in my time at Surrey is very frustrating," said the opener, who began a three-year stint at The Oval this season.

"I leave the team in a good place and hope to be back as soon as possible."

According to the Surrey website, the left-hander's injury was caused by his winter exertions with the Proteas, but Smith was "determined" to begin his stint with the Brown Caps.

And he told BBC London he was "still trying to process" his premature end to the season.

"I'm very disappointed. I thoroughly enjoyed my first few weeks at Surrey, everyone has been outstanding," he continued. "I've built some really good relationships up and from a cricket perspective things were starting to go really well.

"The ankle needs to be fixed right away. If there was an option to stay on and play I would, but I have to get it fixed.

"The nice thing is that hopefully when I come back next year and the year after there won't be any pain. I'm certainly really looking forward to the years to come now, especially after my first few weeks here."

Smith has made one half-century in the County Championship for Surrey, who have drawn all three of their matches in the competition so far this season.

Smith has captained in a record 102 Test matches (101 for South Africa, one for the ICC World XI). Former Australia captain Allan Border has skippered in the next highest amount of Tests (92)

He also made 74 as his side opened their YB40 campaign with a nine-wicket win over Hampshire.

Surrey team director Chris Adams said: "Graeme has made an impressive start as a leader and the squad have really responded to his leadership.

"It's clearly disappointing for all, especially Graeme, but we wish him a speedy recovery."

With Smith previously expected to join up with South Africa for the Champions Trophy, which runs from June 6-23, Surrey signed former Australia captain Ricky Ponting on a two-month deal as cover.

His likely absence from the Champions Trophy squad will be a major blow for South Africa, who are already without star all-rounder Jacques Kallis who misses the tournament for personal reasons.