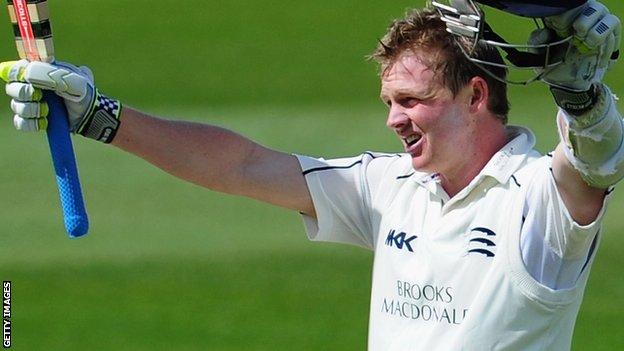 Sam Robson scored a career-best double century as Middlesex piled on the runs against Warwickshire on day two.

Robson, who passed his previous best score of 204 against Oxford MCCC in May 2010, by slog-sweeping Patel for his first six over long on, is an Australian-born batsman but qualifies to play for England next year.

England's Jonathan Trott had earlier put down a sharp caught and bowled chance going to his left with the opener on 141.

Rain swept in from the west at 14:30 BST and umpires Rob Bailey and Steve Gale abandoned play for the day two-and-a-half hours later.

"It was a frustrating day for all at Edgbaston as the weather was the overall winner.

"Sam Robson did have time to hit his first championship double ton to continue his prolific start to the summer.

"The Middlesex opener dominated the bowling again but it was a more controlled approach by Warwickshire than on the first day.

"Neil Dexter's attempt to bring up his 50 brought his downfall and the visitors may reflect on one too many soft dismissals.

"But they remain in a very strong position and they will know early wickets could heap pressure on the hosts' eventual reply."