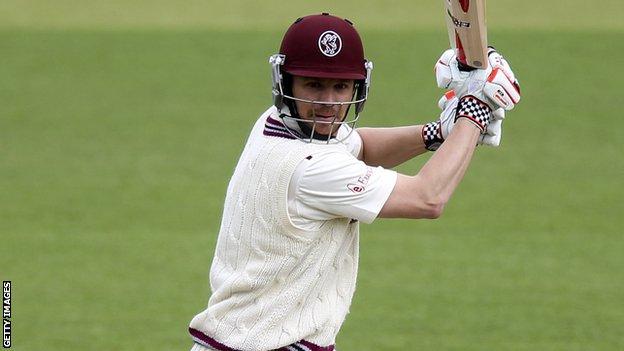 Somerset batsman James Hildreth passed the milestone of 10,000 first-class runs on a rain-ruined third day against Yorkshire at Headingley.

No play was possible after an early lunch was taken, with Somerset on 190-5 and the game is set to end in a draw.

Tim Bresnan removed England opener Nick Compton, who was lbw to the second ball of the day, and Jack Leach.

Alviro Petersen (54) and Hildreth (31 not out) added 66 before Petersen and Arul Suppiah fell to Adil Rashid.

South African Petersen gave a catch to mid-on after hitting eight fours in his 85-ball innings and the leg-spinner's next delivery saw Suppiah taken at short leg by Joe Sayers.

Rashid, who made a career-best 180 on day two, was denied a hat-trick by Jos Buttler at the start of the next over, which proved to be the final one of the day.

It could have been even worse for Somerset if Hildreth, on 24, had been caught by Adam Lyth at second slip when he edged a ball from Steve Patterson, but he despatched the next delivery through the covers for four to reach his personal landmark.

The players were forced from the field after only 26 overs of play with Somerset still 315 runs in arrears and facing the final-day task of pressing on to collect batting bonus points if the weather relents.

"Persistent rain brought proceedings to a premature end shortly before lunch, but Somerset will not be too unhappy about it as a draw now looks a more likely result than a Yorkshire win, which is the only alternative.

"A classy 54 by the prolific Alviro Petersen was the highlight of a truncated day."