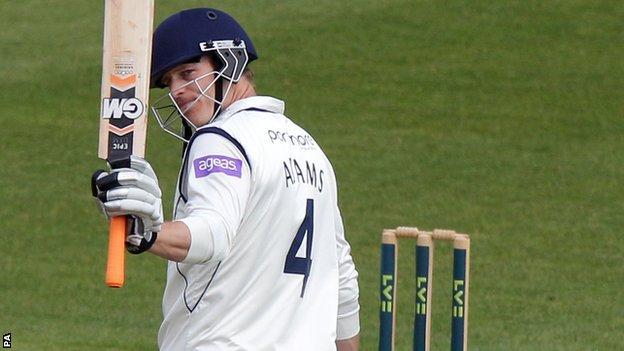 Resuming on 165-8, Adams and Danny Briggs (54) picked up where they left off from the opening day, stretching their ninth-wicket stand to 128.

But after making his maiden first-class half century, Briggs fell to Alex Gidman to leave the visitors 225-9.

James Tomlinson saw off 44 balls before his first run as Adams moved past 100 prior to rain curtailing play on 264-9.

Opener Adams survived a scare on 76 when Gloucestershire wicketkeeper Cameron Herring missed a chance off the bowling of Benny Howell.

Adams' 128-run partnership with Briggs was a Hampshire record for the ninth wicket against Gloucestershire, 16 more than Tim Tremlett and Chris Smith's stand at Cheltenham in 1986.

Meanwhile, Gloucestershire's Will Gidman will play no further part in the game after sustaining an ankle injury on the first day, joining their list of seamers out of action alongside Ian Saxelby, James Fuller, Liam Norwell and Paul Muchall.