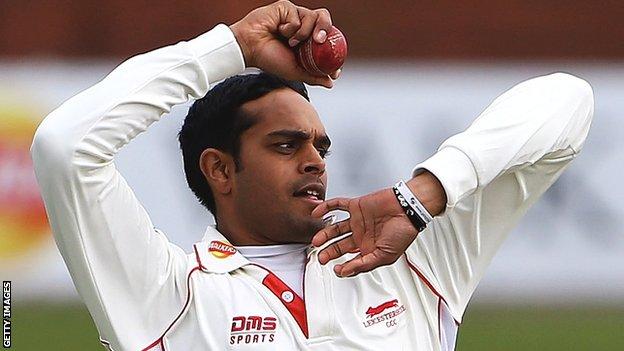 The hosts began on 198-3 and had added 29 runs before Alexei Kervezee (35) became the first of four wickets in the day for Naik.

The Leicestershire spinner finished with 5-98, including Michael Johnson (17) and Gareth Andrew in successive balls, but rain ended play early.

Worcestershire had reached 294-7 with Thilan Samaraweera 92 not out.

Samaraweera added 40 on day two to pass 15,000 first-class runs and is now eight shy of his maiden Worcestershire century.

"The rain once again took a major chunk out of the day, although one could hardly blame the umpires if they had taken the players off to avoid hypothermia.

"Naik got the glory with the wickets in the morning session, but Rob Taylor deserves credit for tying down the Worcestershire batsmen, aided by some clever field placing.

"Samaraweera continues to impress, a man used to playing a long innings, but Johnson's rash shot rather exposed the tail, although Shaaiq Choudhry again proved he is hardy the worst number nine in the country."