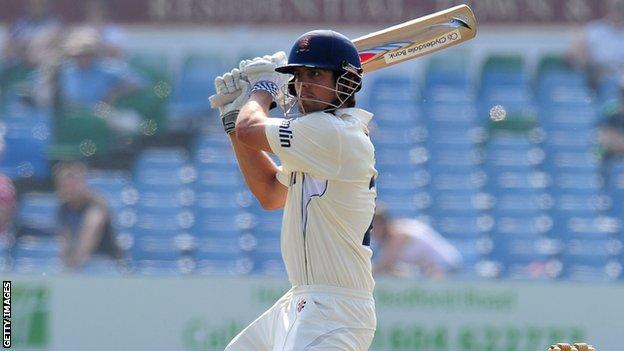 England captain Alastair Cook made good use of his last first-class innings before next week's first Test with 57 not out for Essex against Lancashire.

Cook helped his side build on their first innings lead of 49 after they had bowled out the home side for 177.

Each of Essex's bowlers took a wicket with slow left-armer Tim Phillips mopping up the tail to take 3-20.

Cook took his time on a tricky pitch, but hit eight boundaries as the visitors reached 120-2 at stumps.

He faced 128 balls and batted for 156 minutes, ideal preparation for the game against New Zealand at Lord's, starting next Thursday.

Lancashire began the day on 7-1, replying to Essex's first innings of 226, getting off to the worst possible start when Karl Brown fell for a second-ball duck in the second over of the day.

Luke Procter also went for nought and Ashwell Prince made just 14, both falling to David Masters to leave the hosts in all sorts of trouble on 22-4 inside 12 overs.

Simon Katich (23) and Steven Croft (31) steadied things for a while before the Australian became former Lancashire bowler Sajid Mahmood's first wicket on his return to Old Trafford.

By the time wicketkeeper Gareth Cross had gone for 45, after another patient innings to match the one he played against Glamorgan, they had recovered to reach 159-8.

Although Kyle Hogg (25) added a late flourish, the last two wickets only yielded an extra 18 runs.

Cook steadily led Essex's response and had good support from Rob Quiney in a second wicket stand of 52 as the visitors extended their lead to 169 at the close.

"A very tough day for Lancashire who are right up against it after a blistering start from Essex, who first bowled and then batted themselves into a commanding position.

"A little resilience from Steve Croft and Gareth Cross, who continued with Kyle Hogg, gave Lancashire some hope.

"Alastair Cook enjoyed some time in the middle which is perfect preparation for the summer Tests and looks well placed to go on to three figures."