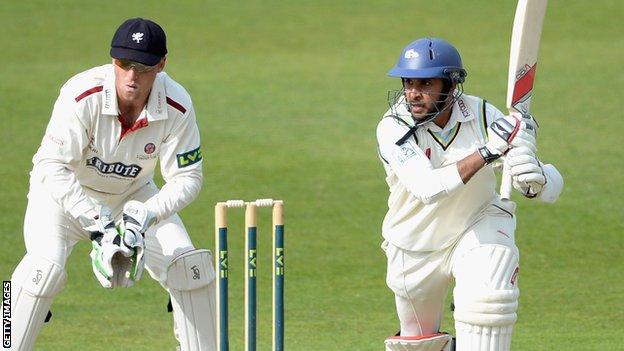 Yorkshire declared on 505-9 after Rashid edged Peter Trego (4-107) to Jos Buttler, who took his fifth catch.

He hit a six and 24 fours and was given excellent support by Richard Pyrah (55) and Jack Brooks (33 not out).

Bad light prevented a prompt start to play, but Rashid continued where he had left off on the opening day as he and overnight partner Andrew Hodd took their sixth-wicket stand to 88 before the latter was caught behind off former Yorkshire paceman Steve Kirby.

The focus thereafter for Yorkshire was to earn maximum batting points, in reaching 400 by the end of the 110th over. But, even though Pyrah scored at better than a run a ball, they came up just short.

Pyrah's 54-ball innings came to an end when he was bowled by Jamie Overton, his partnership with Rashid worth 79, but Brooks hit successive sixes off spinner Jack Leach before the declaration finally came.

England's Tim Bresnan took the new ball for Yorkshire but, despite a number of close calls for Somerset's opening pair, they looked set to see out the day until Trescothick was lbw to Brooks the ball after bringing up a 114-ball half-century with his 10th boundary.

"After looking the easiest thing in the world while Yorkshire were piling up 505-9 declared, batting became a struggle for survival for Marcus Trescothick and Nick Compton against relentlessly accurate and hostile bowling from the home seamers.

"Trescothick somehow battled through to within three overs of the close for his 100th first-class fifty before falling lbw to Jack Brooks, but Somerset still have a mountain to climb."