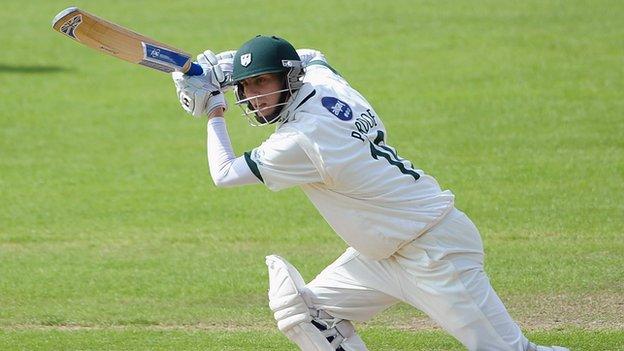 On their first return to New Road since being relegated to Division Two last September, Pardoe top scored with 59.

He was backed by a second half century in six innings from Sri Lankan overseas signing Thilan Samaraweera (52no).

After going off for rain just after tea on 189-3, it was gone six o'clock when the players returned to the field, but only 13 more balls were bowled before they had to go off again.

Worcestershire have yet to find their feet back at the lower level, in their first three Championship matches all on the road, an opening draw against Lancashire having been followed by defeats against Glamorgan and Hampshire to leave Steve Rhodes' side bottom of Division Two.

But fellow strugglers Leicestershire, another side without a win, were again without three front-line seamers, including former captain Matthew Hoggard.

"A pity that the rain arrived to take away part of the afternoon's play as Worcestershire appeared to be easing their way into a decent position.

"Matt Pardoe's diligence and Moeen Ali's flowing drives looked to be getting them into a stronger position.

"But Jigar Naik got reward for early turn to hit the top of off stump and with two spinners in the line-up, Worcestershire might fancy their chances if they can get to 300 or more.

"Thilan Samaraweera again looked a class act. He might do even better when he is fully acclimatised."