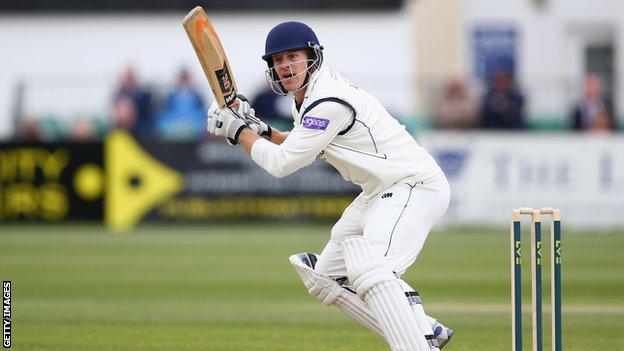 Jimmy Adams hit a gritty unbeaten 74 to rescue Hampshire on a rain-curtailed opening day against Gloucestershire.

The opener batted throughout the day as wickets tumbled around him, sharing an unbroken ninth-wicket stand of 68 with Danny Briggs.

When rain forced the players off just before tea, Hampshire, who had won the toss, were 165-8, having been 69-6.

Gloucestershire opening bowler Will Gidman took 2-14 before having to leave the field with an ankle injury.

Youngster Craig Miles ended the day with 3-44, while Jack Taylor claimed 2-20 on a good first day for the hosts.

Hampshire made a poor start when debutant Michael Roberts was caught behind fending at Gidman in only the ninth over and they soon found themselves in further trouble when Michael Klinger dived to catch Liam Dawson at third slip off Gidman for a duck and George Bailey was bowled by one that kept low from Miles.

The 18-year-old then struck twice more, trapping James Vince lbw and having Sean Ervine caught by Dan Housego at point, before Adam Wheater missed a pull shot off a long hop from Jack Taylor in the last over before lunch.

After the resumption, Chris Wood was taken at mid-on by Benny Howell off David Payne and David Balcombe was lbw to Taylor trying to sweep, with only Adams standing firm and reaching his half-century from 126 balls with six fours.

Briggs proved to be a reliable partner, having reached 25 when the heavens opened.

"Having had Hampshire reeling at 97-8, Gloucestershire will be slightly disappointed that they allowed the ninth wicket to add an irritating unbroken 68.

"Craig Miles, playing only his third Championship game, was the pick of an attack that caused problems particularly in the morning and at lunch he had figures of 3-16.

"Gloucestershire will be worried that they lost another seam bowler, Will Gidman, with an ankle injury."