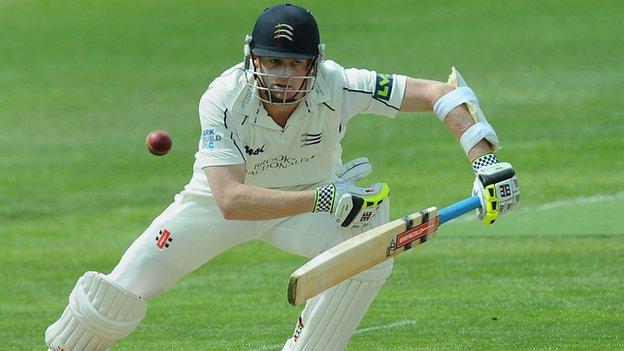 Sam Robson hit an unbeaten century at Edgbaston as Middlesex piled up 280-3 on a rain-shortened first day against county champions Warwickshire.

The hosts had to name a badly-weakened bowling attack, having lost Chris Woakes and Chris Wright to England Lions duty, on top of injuries to Keith Barker and Oliver Hannon-Dalby.

And in-form opener Robson took full advantage to finish the day on 136.

Robson, a second innings centurion against Surrey at The Oval last week, shared half-century partnerships with Malan, Denly and Rogers before play was finally called off over an hour short of the close in the day's 73rd over.

But the seventh century of the English-qualified, Sydney-born opener's career came only after Rikki Clarke had put down a regulation catch at second slip on 73 off Tom Milnes.

But, with Clarke only bowling four overs all day, the Bears were forced to turn to the occasional medium pace of England batsman Jonathan Trott to keep Robson quiet.

By posting two short extra covers they managed to check his progress and Trott was in his 13th over when bad light followed by rain called a halt.

"Sam Robson's early season form was too good for a depleted Warwickshire attack on a dominant opening day for the visitors at Edgbaston.

"Although dropped on his way to completing back to back centuries, the right hander deserved the luck, given the fluency with which he has played since the start of the campaign.

"The track has looked good but there is some movement and the hosts will have to improve their control of the run rate, at very least, otherwise a sizeable Middlesex first innings total is on the cards."