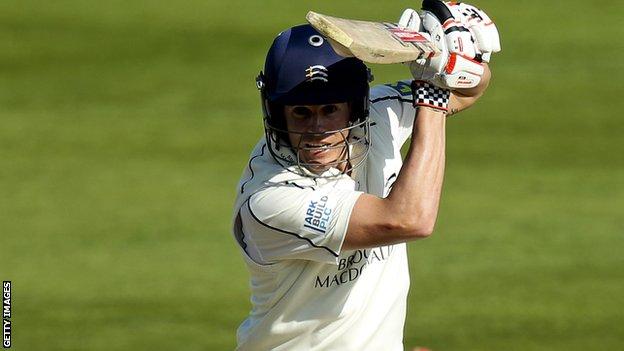 Middlesex captain Chris Rogers completed a superb double century as his side's match with local rivals Surrey ended up in a draw.

Rogers, who is in Australia's squad for this summer's Ashes series, made 214, the ninth double hundred of his career.

They closed on 85-1 and are still winless, while Middlesex are second.

The hosts started the final day on 283-2 with the second new ball only five overs old.

After the early loss of nightwatchman Steve Finn, Rogers and David Malan added 130 in 22 overs.

Rogers was particularly harsh on Tim Linley and Zander de Bruyn before he was bowled trying to sweep off-spinner Gareth Batty to end an innings which in total lasted more than seven hours and contained 20 fours and two sixes from 307 balls.

Surrey thought they had a chance when Middlesex led by 252 with four wickets left and they brought on the part-time bowlers in a bid to force the declaration.

Rory Burns and Arun Harinath each collected their first first-class wicket but Neil Dexter hit 59 and all the visitors were left with was time for some batting practice.

Captain Graeme Smith came out of his recent run of bad scores with 48 of his side's second innings total.

"We were in a pretty ordinary position after day two, so it was probably about us minimising the damage and making sure Surrey didn't win the game because it could be important at the end of the season.

"As captain I'd asked for us to fight and I was trying to lead from the front and, after being selected by Australia, to come out and do that in the next match was quite satisfying.

"We got ourselves into a position where we thought we might even snatch the match and, being the batsman who was in, it was up to me to take them on and we got a decent lead but it's always hard to know what to set in that position and we didn't want to give Surrey a sniff."

"We gave it everything and having done superbly well in the first innings with bat and ball, perhaps we didn't make best of use of the second new ball in Middlesex's second innings.

"We had good conditions to bowl in and didn't make them play enough with the second new ball and Rogers and Robson got in and got going, especially Rogers who was chanceless until he got over 200 when he got dropped.

"I can think of twice when he played and missed and once when he edged and dropped short but to go through a whole innings to that standard is testament to the opposition and you have to give them that.

"The lads worked hard and never let their heads go down. The only disappointment is that it could have been a thrilling game set up. We thought at lunchtime Middlesex might have given us a chase but it petered out into a bit of a boring draw in the end."

"So honours even at Lord's and, in the end, the game turned on the magnificent opening stand between Sam Robson and Chris Rogers.

"Surrey made the right decision in enforcing the follow-on but Rogers played fantastically well in making 214 and putting a run chase beyond Surrey.

"Graeme Smith saw Surrey to the close but, all in all, this was the proverbial 'game of two halves'."