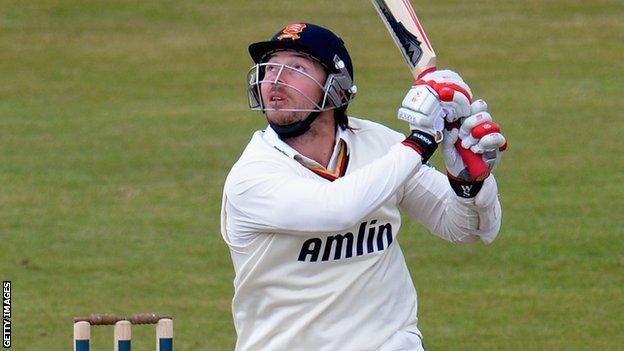 Graham Napier continued his great start to the season with an unbeaten 102 and England captain Alastair Cook scored 34 as Essex made 226 against Lancashire.

Napier, top of the Division Two batting averages, made his highest score of the season, but ran out of partners as Essex recovered from a perilous 77-5.

Cook, in his last first-class game before next week's first Test against New Zealand, was one of four victims for Luke Procter, who took 4-66.

Lancashire reached 7-1 at the close.

Paul Horton was caught behind by James Foster off a short of a length lifter from Reece Topley for three from the final ball of the second over of the hosts' reply.

Cook was second highest scorer for Essex with Foster (24) and Rob Quiney (21) the only other players to pass 20.

Napier, who averaged 119 from his first three first-class innings of the season, almost missed out on his first century of the campaign when Glen Chapple dropped a skier off his own bowling.

He had earlier been dropped on nine by first slip Horton off Procter, who later put him down off his own bowling when he had made 32

Napier batted for 215 minutes and faced 178 balls, hitting 10 fours and two sixes, and shared a 54-run sixth-wicket partnership with Foster.

"Losing Paul Horton with the final delivery of the day shouldn't take the shine of what was a good day for Lancashire.

"After a pretty even morning session Lancashire enjoyed an explosive start after lunch as Luke Procter took the prize wicket of England captain Alastair Cook, one of his four victims and on a wicket which seems to have a little more pace and carry than the first two games at Old Trafford."