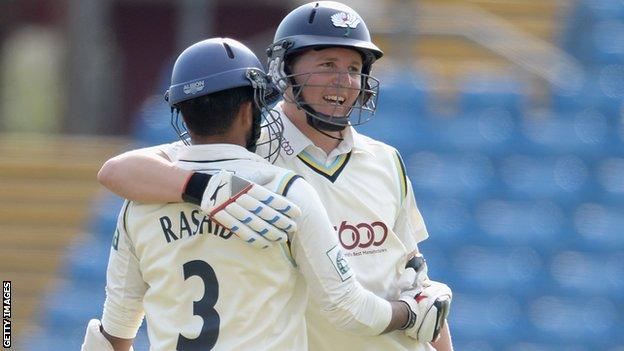 Gary Ballance and Adil Rashid proved Yorkshire have the strength in depth to cope without England stars as they hit centuries on day one against Somerset.

The home side were missing Joe Root and Jonny Bairstow, who will both be on England Lions duty this week.

And after losing both openers cheaply, they were reduced to 75-4 before lunch.

Their partnership of 207 was Yorkshire's highest for the fifth wicket in first-class matches at Headingley and took place in front of England selectors Geoff Miller and James Whitaker.

It overtook the 196 between Roy Kilner and George Hirst against Gloucestershire in 1919.

They were eventually separated when former Yorkshire paceman Steve Kirby, a member of the club's 2001 Championship-winning side, won an lbw decision against left-hander Ballance, who struck 13 fours during his innings.

Ballance had brought up his hundred off 187 balls with a boundary off Kirby and Rashid took only two balls more to reach only the fourth three-figure score of his first-class career, and his first for four years, also with a four off the same bowler.

It had all looked very different earlier in the day at Headingley as Peter Trego had Adam Lyth caught behind for a duck with the fourth delivery of the match and accounted for Joe Sayers for a single in similar fashion.

The day's first boundary, struck by Andrew Gale, did not arrive until the 12th over, but he went for 17 off Alfonso Thomas as wicketkeeper Jos Buttler claimed his third catch of the morning, and Kirby then struck by removing Phil Jaques one run short of a half century, with the help of second slip Marcus Trescothick, who had earlier dropped the Australian when he was on 22.

"But in the afternoon, Gary Ballance and Adil Rashid took the game right away from them with sensible, stylish centuries.

"Somerset's Director of Cricket, Dave Nosworthy, called it "a tough day at the office", and he's not wrong."