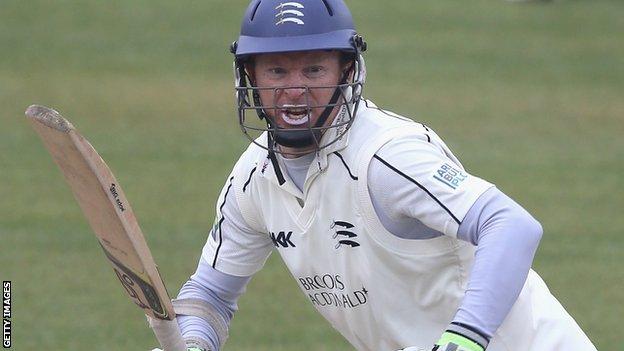 Chris Rogers and Sam Robson both scored magnificent centuries for Middlesex as they shared a record-breaking opening stand of 259 after being asked to follow-on by Surrey.

The pair recorded the county's highest first-wicket partnership against Surrey before Robson gloved a Zander de Bruyn delivery behind for 129.

Earlier Middlesex were all out for 166, still 23 short of the follow-on target.

Surrey captain Graeme Smith could have not envisaged the ease with which his bowling attack was going to be taken apart when he asked Middlesex to bat again in the morning session.

But the wicket seemed to get flatter as the day went on, with Rogers and 23-year-old Robson looking untroubled, batting for more than six hours together to register their first hundreds of the season.

After Robson fell to a tired looking shot, a frustrated Jade Dernbach enticed Denly to edge to Vikram Solanki in the slips.

But captain Rogers led from the front to give Middlesex a lead of 111 and ensure all three results are still possible on what promises to be an intriguing final day at Lord's.

"A magnificent effort from Chris Rogers and Sam Robson who played with great character to get Middlesex back into the game.

"After being forced to follow on by Surrey the Middlesex opening pair put on a record stand of 259 until Robson fell to Zander de Bruyn for 129.

"Jade Dernbach then picked up Joe Denly just before the close but Rogers was still there at stumps unbeaten on 131.

"A long day for the Surrey bowlers but they know if they could pick up quick wickets tomorrow their batsman would still fancy a chase on the final day."

"It was an astonishing fightback from the hosts, as Robson and Rogers broke a 106-year record for Middlesex's opening wicket against Surrey.

"The younger of the pair will reflect on what must be his most impressive century to date, while his vastly experienced skipper can hardly have scored a more important one.

"Rogers' wicket remains the key as Middlesex aren't completely out of trouble just yet and the final day could be yet another thriller in the London derby if Surrey can force their way through with the second new ball already in hand.

"A target of anything more than 200 would be tricky for the visitors, who may find the match turns on its head if they themselves lose early wickets in any potential chase."