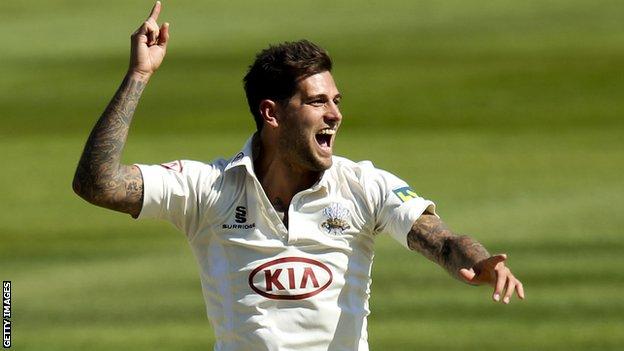 Disciplined Surrey bowling, led by paceman Jade Dernbach, put them on top on day two against Middlesex at Lord's.

After skipper Chris Rogers dragged a wide ball from Zander de Bruyn into his stumps, Dernbach took 3-59 as the home side struggled to 161-9 at stumps.

Surrey, 267-4 overnight, had earlier been bowled out for 338, losing their last five wickets for only 27 runs.

Tim Murtagh (3-54) and Corey Collymore (3-72) had the best figures, but Roland-Jones produced arguably the ball of the day with a rapid lifter that took the shoulder of a startled de Bruyn's bat on its way through to wicketkeeper.

Gary Wilson was left high and dry on 30 not out as the Surrey tail quickly subsided, but they soon made amends with the ball once Rogers had paid the penalty for a rush of blood that Australia will not want to see repeated in this summer's Ashes series.

Sam Robson, awarded his county cap by Middlesex on the opening day, survived for almost two hours but, having reached 36, he then got a thin edge to a good delivery from de Bruyn and was caught behind.

It looked like Middlesex might be bowled out before the close when Steven Finn was lbw to Tim Linley, giving Surrey a full complement of bowling points, but Murtagh managed to block out the final over from spinner Gareth Batty.

"Surrey are in full control after a day that had started in the favour of their opponents.

"The six wickets Middlesex claimed in the morning session to wrap up the visitors' first innings, appeared to even out the match, but Surrey ripped through the hosts' batting line up.

"The follow-on target should be beyond the final pair. Whether Surrey will enforce it remains to be seen. They may prefer to avoid a potentially tricky run chase in the final innings on a pitch already offering inconsistent bounce."

"Surrey's bowlers combined on the second day to put Middlesex under real pressure at Lord's.

"Jade Dernbach was probably the pick with his three wickets but they did a tremendous job as a unit.

"And they have an opportunity to push home their advantage tomorrow with Middlesex still 28 runs short of avoiding the follow-on."