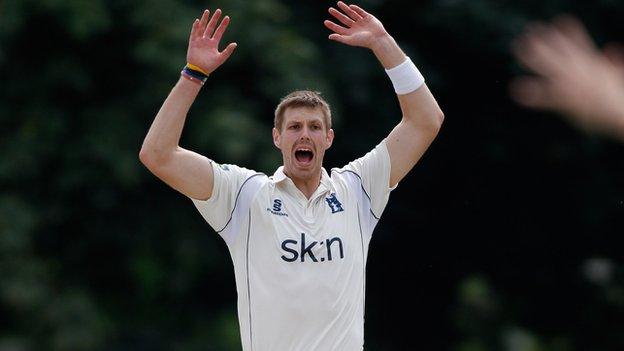 Fit-again Warwickshire fast bowler Boyd Rankin made an impressive return to action on a batsman-friendly track against Sussex at Hove.

But Rankin took half of the six wickets to fall in the day to end with tidy figures of 3-60 from 22 overs.

Big Boyd is back

Luke Wells, 73 overnight, went four short of a ton for 96, while Ben Brown was still there at the close on 82.

In front of England selector Geoff Miller, on a slow wicket offering little help to the bowlers, England hopeful Rankin took both wickets that fell in the morning session in a fiery spell.

The 6ft 8in Irish international might have had a third, with England keeper Matt Prior perilously close to being dismissed lbw first ball.

But Prior survived to make a rapid 42 in 40 balls, while skipper Ed Joyce also weighed in with 42, an innings that went on three times as long.

"The fact that just 17 wickets have fallen in three days tells the story of the game.

"A low, flat wicket has made wicket-taking difficult, scoring runs a slow process, and a draw now is almost inevitable.

"For all that, the Warwickshire bowlers never gave up and Luke Wells batted well, missing out by just four runs on consecutive hundreds."