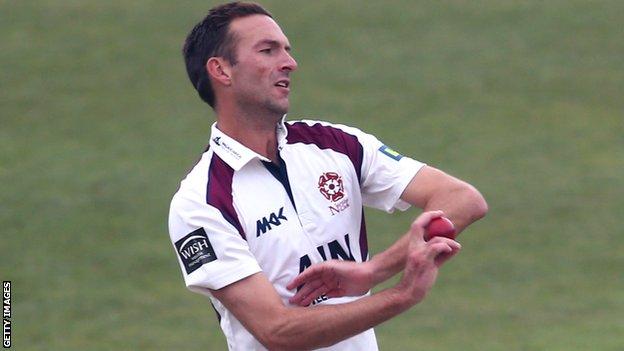 Australian Trent Copeland produced match figures of 10-113 as Northants eased to a seven-wicket win over Kent.

The hosts were dismissed for just 135 with Geraint Jones, who made 57 before falling to David Willey, one of only three players to reach double figures.

Copeland took 5-42 at Canterbury, to go with his

"We have to chalk it down as one of those days in cricket. We have guys with runs in the dressing room. But this was a bit of a blip"

Northants secured their third win of the season to stay top of Division Two, skipper Stephen Peters making 37 as they reached their target on 105-3.

Kent are now without a win in three matches after drawing their first two games of the season.

The day began badly for the home side who suffered a nightmare first session, six wickets falling for 64 runs .

They also lost batsman Michael Powell, who retired hurt with an arm injury, the legacy of a blow he took at short leg on day two.

Powell did eventually return but was left stranded on seven not out when Willey bowled last man Charlie Shreck.

Peters and Kyle Coetzer put on 52 for the first wicket in the visitors' run chase, before Andrew Hall and Alex Wakely finished the job.

"Kent succumbed in the sunshine and could offer no real excuses. The batters did not throw their wickets away on a day made for batting, they just came up against some superb bowling.

"Most of those who turned up in the best weather of the year so far could have had no inkling of how the day would unfold.

"Many would have expected Kent to have been in a winning position at close of play, but Trent Copeland had other ideas.

"Some days the suns shines, but doesn't smile on those who expect it to."

"This was the day where Northamptonshire - 20-1 outsiders to win Division Two before the start of the season - became genuine contenders for promotion.

"Copeland had the sort of day new-ball bowlers dream of, exploiting variable bounce, obtaining movement and most importantly, getting wickets.

"If they can coax him back from Australia by mid-August and if Northants maintain their early season form, a failing in previous years, they will difficult to ignore for end of season honours."