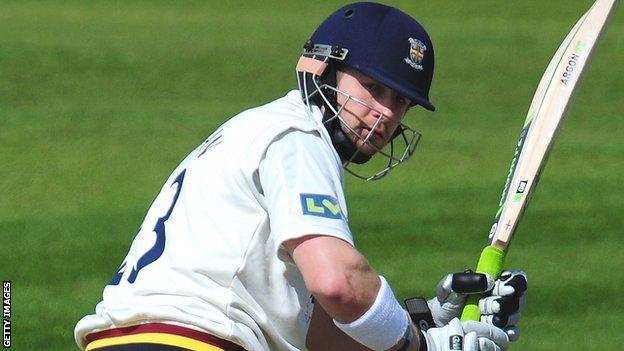 Mark Stoneman and Phil Mustard scored half centuries as Durham blasted their way to a remarkable six-wicket victory over Nottinghamshire.

The skill level from Phil Mustard and Mark Stoneman was absolutely incredible, especially against world-class bowlers

The visitors were evacuated from their hotel in Nottingham during the night after a fire broke out in the fitness centre at the Crowne Plaza at around 02:00 BST

Durham's players were not rehoused in another hotel until three hours later and they then had to contend with a resilient Notts for the first two sessions.

Lumb faced 226 balls in scoring his 16th first-class century and he was initially helped by night-watchman Luke Fletcher (17), who spent an hour and a half at the crease.

Durham attacked from the start as Stoneman smashed two sixes and eight fours in his 38-ball innings, while Mustard hit two sixes and seven fours in a 54-ball stay.

Swann kept chipping away at one end and took the wickets of Stoneman, Mustard, Ben Stokes and Dale Benkenstein.

Breese (18 not out) hit the winning runs as Durham won at Trent Bridge for only the fourth time in Championship cricket.

"I have never been involved in a game like that. The skill level from Phil Mustard and Mark Stoneman was absolutely incredible, especially against world-class bowlers.

"I think we're all a bit gob-smacked. It did need something out of the ordinary and these guys can do things like that.

"We never had any sleep last night because of the fire at the hotel, but we managed to keep smiling about it.

"Perhaps we need to do that every week and end up in McDonalds having a coffee at 4am in the morning."

"A hugely disappointing outcome for Notts having battled bravely to extend the match into the final session.

"Durham's run chase was simply scintillating, some extraordinary shots - but the home side now have problems.

"Nine international cricketers on show yet this is the county's worst start for many a year.

"In an ultra-competitive Division One the heat is already on Mick Newell's side."

"Durham pulled off what seemed like the impossible here.

"Their players fielded for nearly the entire day and with little sleep following a fire at the team hotel last night.

"Durham needed 183 to win and a run-rate they would struggle with in a T20 game with fielding restrictions in place.

"Mark Stoneman and Phil Mustard set them on their way, and they got there with six wickets and 2.4 overs to spare."