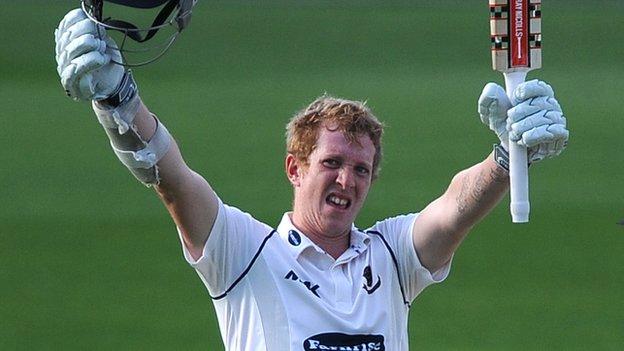 Luke Wells led the Sussex response as batsmen continued to dominate on day two against Warwickshire at Hove.

Despite England's Jonathan Trott adding just nine to his overnight score to be out for 96, the Bears piled up 453.

Chris Woakes (72) put on 103 for the eighth wicket with Tom Milnes (42), while England's Matt Prior equalled the Sussex wicketkeeping record with six catches in the innings.

The England Under-19 international shared a 108-run opening stand with Chris Nash, who was given out caught at slip for 43 by Varun Chopra after the ball deflected up off the boot of Will Porterfield, who was fielding alongside him.

Wells then had an escape just before the close when he offered a sharp return catch to Bears spinner Jeetan Patel.

Earlier, pacemen Chris Jordan was again the pick of the Sussex bowling in the morning session, claiming the wickets of Trott and Tim Ambrose for a duck to finish with 4-73, backed by Warwickshire old boy James Anyon's 3-82.

"The odds are firmly on a draw at Hove, with a slow pitch offering little or no help to the bowlers.

"The benign wicket is also making scoring runs quickly very difficult and, even with the powerful Sussex middle order, it will take a monumental effort to establish a winning position.

"Sussex will have been delighted with another fine spell of bowling from Chris Jordan and another solid contribution from Luke Wells, following last week's career best 208 at The Oval."

"Warwickshire's bowlers will have to do something special if the champions are to win this game.

"There's little to encourage them on a slow, low pitch which had yet to show much sign of turn to help Jeetan Patel.

"The only time in the match so far when a bowler has looked on top was at the start of the second day. Sussex's Chris Jordan extracted a bit of life out of the pitch and the Bears bowlers will hope they can do something similar first thing on Friday morning."