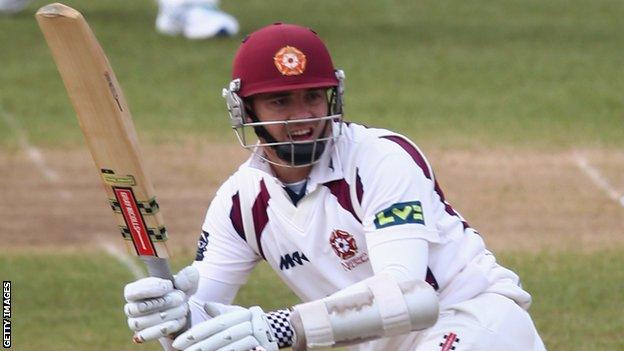 Skipper Stephen Peters scored 106 to drag Northants to 303 all out and a 32-run first innings lead over Kent.

The opener held the innings together as wickets fell at the other end.

Kent were on top as Northants stumbled to 186-7, but all-rounder Steven Crook saw Peters to a 233-ball century and contributed 62 of his own.

Crook and Rob Newton (21 not out) took Northants to an extra bonus point after Peters departed, before Kent reached 6-0 from three overs before stumps.

"This was a thoroughly engrossing day of slow-burn Championship cricket at its very best which left the match finely balanced and a result impossible to call.

"If Northants end up winning, they can thank captain Stephen Peters, whose his century was a benchmark in due care and attention, and only Steven Crook's third successive Championship fifty aided his cause.

"A first-innings lead of 32 was manna from heaven when the visitors were struggling mid-afternoon."