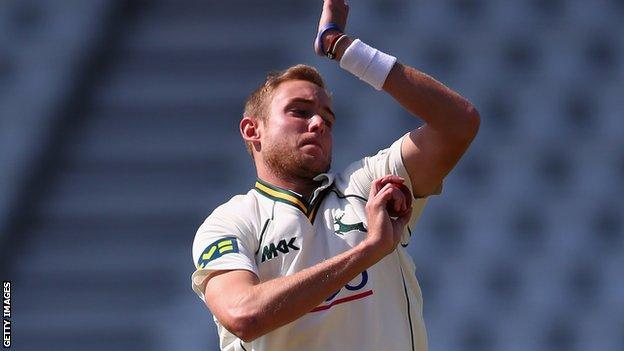 England paceman Broad was forced off on day one with a groin injury, but finished with figures of 4-88.

With Durham resuming on 297-6, opening batsmen and former Nottinghamshire player Smith extended his patient spell at the crease to eight and a half hours before finally falling to Samit Patel with the visitors on 356-8.

But tail-enders Breese - playing in his first Championship match for three years - and Wood guided them into a comfortable lead, impressing with their batting displays, while Nottinghamshire and England spinner Graeme Swann (0-90) continued to toil as he recovers from elbow surgery.

The hosts' response then got off to the worst possible start when Alex Hales - dismissed for two in the first innings - fell to Chris Rushworth without a run.

James Taylor, Ed Cowan (35) and Patel also went to an inspired Wood (3-36), and despite Lumb and Cowan providing some resistance, Durham appear in control going into the final day.

Wood appears to enjoy playing at Trent Bridge, having made his only other two Championship appearances for Durham at the home of Nottinghamshire in 2011 and 2012.

"Nottinghamshire director of cricket Mick Newell was rightly concerned about the application shown by some of his top order after his batsmen failed to emulate what Durham's lower order had achieved earlier in the day.

"A pitch that seemed benign suddenly looked to be full of demons as Mark Wood whipped out three wickets in quick succession, after the early loss of Alex Hales.

"Michael Lumb stood firm at the close but he will need an awful lot of support if those three draw points are to be gathered."

"Excellent work from the Durham bowlers has reduced Notts to 145-5 in their second innings, still six runs behind. And although Michael Lumb will resume the final morning on 77, he's running out of partners.

"Will Smith's 153 gave Durham a major platform in this game and was key to their 151-run lead at the end of their first innings. A special mention must also go to Mark Wood too - his only other County Championship appearances for Durham have been on this ground.

"Today he scored a career-best 58 and then took 3-16 as Cowan, Taylor and Patel disappeared in a seven-over period.

"There has been plenty of talk of the heavy roller ruining the bowler's chances this season. However, this is Durham's fourth game and it looks like it will be the fourth in a row which doesn't end in a draw."