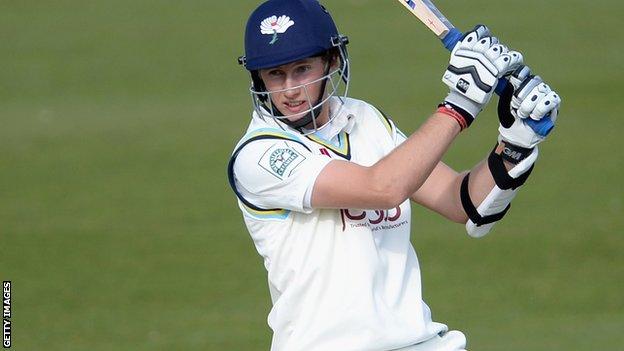 Joe Root hit a career-best 236 and England team-mate Jonny Bairstow made 186 as Yorkshire raced towards a massive total at Headingley.

Root made serene progress to the second double century of his career, striking 24 boundaries in his 336-ball innings.

He and Bairstow combined to share a 231-run stand for the fourth wicket.

Ballance was unbeaten on 50 just before the close, with Yorkshire looking towards a declaration on the final morning and an attempt by their bowlers to force an unlikely victory on an excellent batting strip.

Following on from Chesney Hughes's amazing 270 for Derbyshire on the previous day, Root and Phil Jaques would have been confident of capitalising on conditions at the start of play.

Jaques was run out by Wayne Madsen for 39 following a mix-up with his partner and Andrew Gale soon followed for five.

But Root remained unflustered and in Bairstow had a team-mate keen to take on the Derbyshire bowling attack.

Having passed his previous best of 222, Root eventually fell to Redfern, but Bairstow and Ballance accelerated the scoring to take Yorkshire into a substantial lead.

Bairstow was eventually caught by Tim Groenewald at square leg off the bowling of Wayne Durston in the penultimate over of the day.