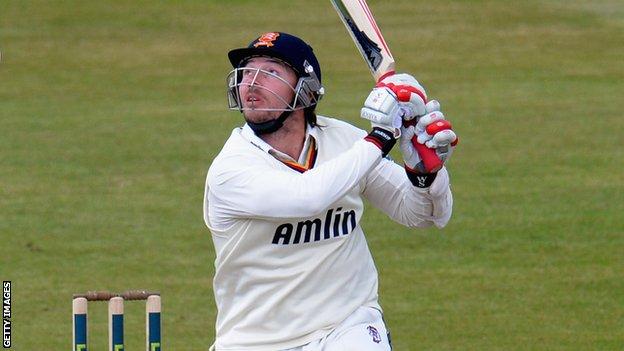 Graham Napier and England captain Alastair Cook made contrasting half centuries to help Essex to a first-innings lead against Hampshire.

The home side were eventually all out for 254, James Tomlinson and Danny Briggs each taking three wickets.

Trailing by 57, Hampshire lost both openers cheaply, but ended day two at Chelmsford back in credit on 77-2.

Cook's innings was exactly what he needed in terms of time at the crease ahead of the Test series against New Zealand, but with his side starting the day on 72-5, it was not a situation permitting him to indulge any notion of extravagant strokeplay.

Napier, however, was willing to play his normal game and shared a ninth-wicket stand of 87 with Tim Phillips (40 not out) before falling leg-before to Chris Wood.

An excellent short-leg catch by Ben Foakes to dismiss Hampshire opener Michael Carberry for two off David Masters was a highlight of the final session, but Liam Dawson (31) and George Bailey (26) added 56 together before the close, with neither side having a clear advantage at the half-way point of the match.

"This is the toughest test that Hampshire have been handed so far.

"A crucial unbroken third-wicket stand of 56 for Hampshire at the end between George Bailey and Liam Dawson took the heat out of a tight situation that they found themselves in at 21-2, still behind overall.

"This game could go any way."