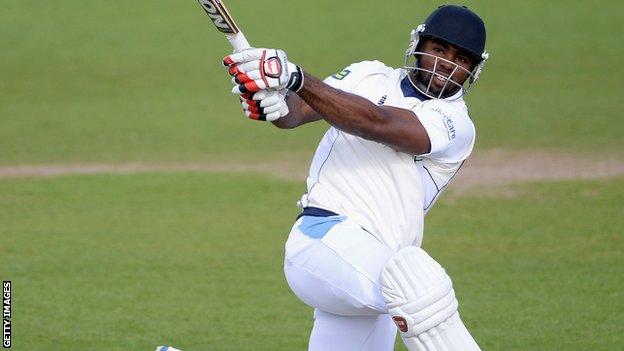 Chesney Hughes fell just four runs short of equalling the highest ever first-class score by a Derbyshire batsman on day two at Headingley.

Chesney Hughes's 270 not out

But the day will be remembered for Hughes's nine-hour innings, which included 40 fours and three sixes.

Having already passed his previous career-best score of 167 on the opening day, the Anguilla-born batsman was looking to continue in a similar fashion on the second morning.

Lyth took his third catch of the innings to remove Dan Redfern off the bowling of Tim Bresnan in the third over, but David Wainwright (18) combined with Hughes to put on 81 before the otherwise-expensive Adil Rashid (3-122) trapped the former Yorkshire player leg before.

Despite some resistance from Tom Poynton (27), Hughes gradually ran out of partners to leave him agonisingly short of Derbyshire's record innings of 274 by George Townsend 117 years ago.

"It was good to watch from a coach's point of view. You can see where Chesney has developed over the last few weeks as before he was quick to flash at deliveries, but today and yesterday he had a really good mixture of aggression and control," batting coach Dave Houghton told the club's website.

"When batting that long it is also important that you remain focused and Chesney did that brilliantly.

"He was, of course, a little disappointed not to get the all-time record, but second highest of all-time is not too bad to have."

In reply, Lyth and Root looked untroubled as they put on 126 for the opening wicket, only for Tim Groenewald to dismiss the former in the final hour of play with the help of Dan Redfern's catch at second slip.