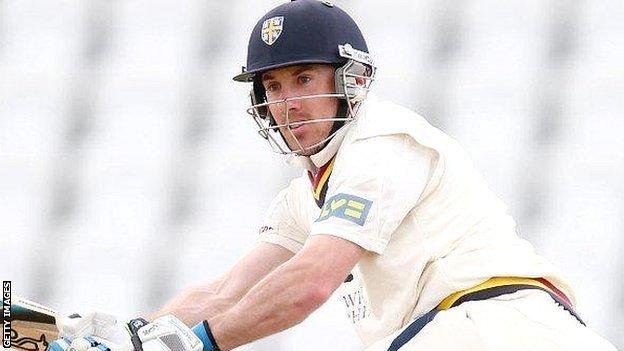 Will Smith scored an unbeaten century against his former county as Durham had the better of Nottinghamshire on day two at Trent Bridge.

England spinner Graeme Swann, bowling for the first time since his elbow operation, was wicketless in 20 overs.

Phil Mustard is unbeaten on 15 with Durham trailing Notts by 23 runs.

Ajmal Shahzad (2-57) struck in the second over of the day with nightwatchman Chris Rushworth caught behind by Chris Read for 12.

Stuart Broad (2-65) and Luke Fletcher were also among the wickets as the visitors were struggling slightly on 148-5.

But Smith and Collingwood batted for 47 overs to frustrate Notts in the middle of the day.

Smith, who played for Notts from 2002 to 2006, had previously never scored more than 87 at Trent Bridge.

"At the 25th time of asking, Will Smith finally scored a century at Trent Bridge.

"The former Nottinghamshire batsman made the most of his return to his former stamping ground and showed terrific. discipline to bat the whole day.

"Good as Smith's knock was, the epic duel between Stuart Broad and Paul Collingwood provided the day's highlight.

"A terrific spell of genuine fast bowling finally ended a magnificent innings - great stuff from them both."

"You have to hand it to Will Smith - he's spent the entire duration of the game on the field.

"His 100 - his first in the County Championship since May last year - came in a very patient 170 deliveries, but it helped rescue Durham from what looked like being a big deficit.

"Smith has been under immense pressure after a difficult start to the season. This will have been a major boost to his confidence."