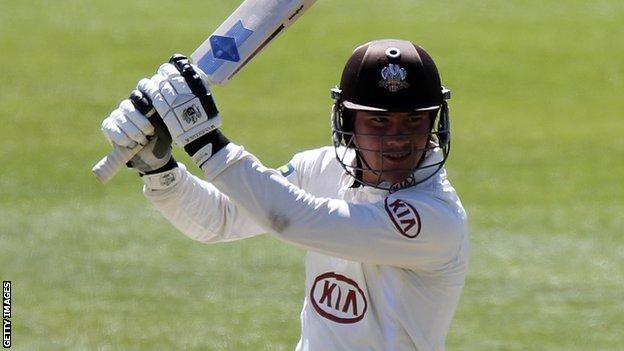 Opener Rory Burns made a patient 114 as Surrey attempted to lay the foundation for a sizeable total against Middlesex on the opening day at Lord's.

The 22-year-old left-hander faced 267 balls and hit 12 fours in the fourth first-class century of his career.

Surrey shrugged off the loss of skipper Graeme Smith for a duck as Burns and Arun Harinath (61) added 147 in tandem.

Harinath eventually fell to Steven Finn and Burns was bowled by Tim Murtagh near the close as Surrey reached 267-4.

With Middlesex beginning the match at the top of the Division One table after two wins and Surrey bottom after two draws, there was plenty of incentive for both sides.

The visitors did not get the start they wanted after Smith won the toss as the South African prodded forward to an angled delivery from Murtagh and was caught low down by Dawid Malan at slip after batting for 25 minutes without getting off the mark.

Burns and Harinath were understandably cautious and the scoring rate was as sedate as the Middlesex over-rate through the morning and most of the afternoon, although Burns would have been run out on 38 if Paul Stirling's throw from gully had hit the stumps.

Harinath departed when England fast bowler Finn found the edge as he attempted a forcing stroke off the back foot and John Simpson took the catch, but Vikram Solanki contributed a breezy 43 to a 64-run partnership before falling to Corey Collymore.

Burns' innings spanned almost five and a half hours and he was slightly unlucky not to survive to the close when he tried to drive Murtagh and the ball found its way through to the stumps off the inside edge.

"Surrey will be delighted with their efforts with the bat having won the toss on the opening day.

"The early loss of Graeme Smith was a big blow for Middlesex to strike, but the batting thereafter denied the hosts for two sessions before pushing on after tea.

"There is still work for the visitors to do post a formidable first innings total and Middlesex will hope for early success on the second morning to make up for lost time on a pitch that is offering assistance for the seam and swing bowlers."