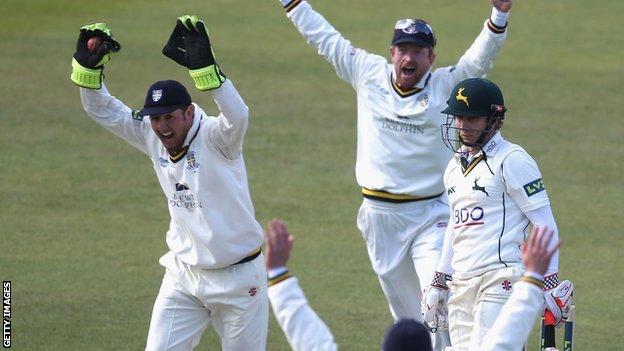 James Taylor fell three runs short of a second century in four days after spearheading Nottinghamshire's recovery on the opening day against Durham.

Notts were wobbling on 98-4 at lunch at Trent Bridge after Graham Onions and Ben Stokes both took two wickets.

Ajmal Shahzad trapped Mark Stoneman leg before for 30 as Durham closed on 34-1.

After Notts chose to bat, Durham's England seamer Graham Onions had Australia batsman Ed Cowan dropped by Stokes in the slips off the fifth ball of the day.

Ben Stokes says he owes Graham Onions a few pints after putting down some catches early on. Stokes confessed to dropping four on the day

But, after trapping Alex Hales leg before with a straight one he left alone, Onions got his revenge when he had Cowan caught by Will Smith at backward point for a rapid 40.

Stokes claimed the wickets of Michael Lumb and, with the final ball of the morning session, Samit Patel to leave Notts struggling.

But Mullaney made the most of being dropped on six by Stokes, again off Onions, to give Taylor valuable support.

Taylor, who struck 14 boundaries, was finally caught behind off spinner Gareth Breese just short of his ton from the final ball of the 78th over, with Breese then catching Broad off Stokes from the first delivery of the 79th.

But once they were parted, Chris Rushworth quickly polished off the tail, with England spinner Graeme Swann, playing his first game since recovering from an elbow problem that ruled him out of the Test series in New Zealand in March, left marooned on eight not out.

The 34-year-old had several pieces of bones removed following the injury and had been hoping to return last week against Derbyshire before a swelling prevented that.

He faced 15 balls on Monday, scoring one four before Luke Fletcher was dismissed to end their innings.

However, Broad later gave England a worry by reporting a tight groin which forced him off the field after bowling three overs.

"James Taylor celebrated his England Lions call-up with another high-quality innings that deserved to be extended by three more runs.

"Taylor's solid accumulation and some fluent, punchy stroke-play from Steven Mullaney and Stuart Broad made this a really enjoyable day's cricket.

"Ajmal Shahzad's late dismissal of Mark Stoneman ensured it would be honour's even by stumps."

"Having been gifted so many lives the Notts batsmen will be wondering why they didn't post more than 320 here.

"Ed Cowan, Steven Mullaney and Stuart Broad all benefited from poor fielding as they were given lives in the infancy of their innings.

"Among those three alone the home side got lucky to the tune of 149 runs.

"Ben Stokes says he owes Graham Onions a few pints after putting down some catches early on. Stokes confessed to dropping four on the day. I hope come the finale to this Durham are not left counting the cost of those untaken chances."