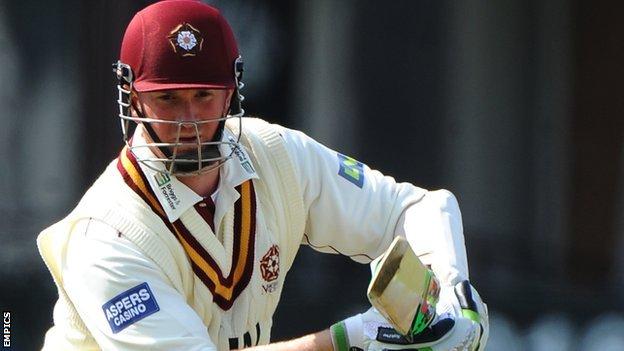 Northants strengthened their place at the top of Division Two of the County Championship with a seven-wicket win over Gloucestershire at Bristol.

The visitors resumed just 68 runs ahead in their second innings and, when Jack Taylor was last man out for a gutsy 48, the total was 299 and the lead only 87.

But Northants reached 90-3 off 22.3 overs before lunch to secure victory.

The visitors made a nervy start, losing openers Coetzer (5) and Peters (7) with only 18 on the board.

Coetzer was well caught low down by Taylor at mid-wicket off David Payne, for five. And Peters miscued a leg-side shot to substitute fielder Graeme McCarter off Will Gidman.

Wakely counter-attacked with a brisk 20, including a fine straight six off Taylor's off-spin but he perished when another attacking shot went to Chris Dent at mid-wicket to leave them 51-3.

David Sales (29 not out) and Rob Newton (15) played with calmness to earn Northants an emphatic win and maximum points of 24.

Earlier Taylor produced some defiant blows, including a six over wide long-on off Trent Copeland.

But he was unable to help reach his half-century and then push the lead into three figures and give the hosts a sniff of a shock win.

His resistance ended when he bottom-edged on to his stumps to give Steven Crook his fourth wicket of the innings, seventh of the match and 18th of the season.

"The fact that Northants lost three wickets chasing a modest total showed that if Gloucestershire had batted better on the first day it could have been difficult if the visitors had to get anything more than 150 to win.

"Captain Michael Klinger can take positives from the gritty attitude of his team from the third day, but he will be looking for more runs from the top order and fewer bad deliveries from his attack."

"It took 25 minutes for Northants to get the final Gloucestershire wicket and despite the loss of three wickets, the visitors completed the win just before 1pm.

"Two wins out of three gives Northants supporters hope - it's as many wins as they managed throughout 2012 but they challenged strongly for promotion in 2011.

"While Stephen Peters' side are going quietly about their business, they are looking as if they will be challenging in 2013 if they can sustain this highly impressive start to the campaign."