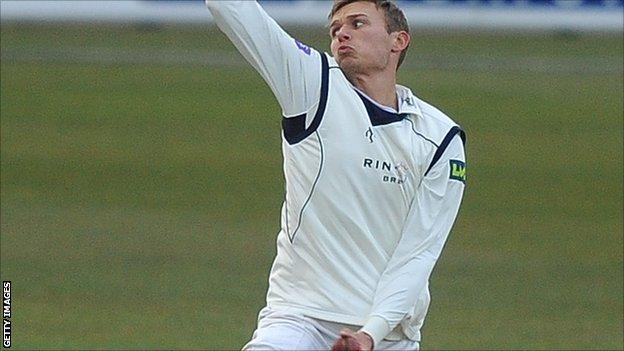 Hampshire earned their first victory of the season after beating Worcestershire by an innings and 42 runs.

Resuming on 159-5 and faced with the unlikely task of batting all day to save the game, Worcestershire's second innings yielded 252.

Once the partnership of captain Daryl Mitchell (92) and wicket-keeper Michael Johnson (44) was broken, they crumbled.

Some lusty hitting from Gareth Andrew (28 from 27 balls) delayed the inevitable, but Hants soon prevailed.

David Balcombe removed Richard Jones before Andrew departed after holing out to Sean Ervine at long-on off the bowling of Danny Briggs, to leave his side just one wicket from defeat.

And that wicket came as the lunch break loomed with Briggs, who claimed 3-38, bowling Chris Russell for a duck to complete victory.

"Hampshire had to wait 50 minutes to make the breakthrough this morning and the second new ball after eight overs did the trick.

"David Balcombe was hostile once he'd loosened up.

"The county have dominated from start to finish in the two Championship matches they have played to date, only being thwarted by rain in the first one. Other teams beware."

"Defeat may have been inevitable for Worcestershire but the final day was always going to be about whether they could muster a bit of much-needed gumption.

"The captain Daryl Mitchell and wicketkeeper Michael Johnson did their best to prolong the action in the morning but when Mitchell was lbw for 92 (missing out on a century in his 100th first-class match) the innings fell away again as the last five wickets went for 40 runs.

"Johnson's punchy 44 was a personal triumph. His innings decorated with forceful drives and meaty pulls. At times, it was almost as if he was back home in Perth. Worcestershire will hope this is a breakthrough knock.

"Worcestershire now have a short break from four-day cricket with a game against the Oxford students and a YB40 match at Sussex before they finally get underway at New Road on 8 May against Leicestershire.

"Between now and then a number of players, who might otherwise had some time off, will have to take advantage of some vital game time."