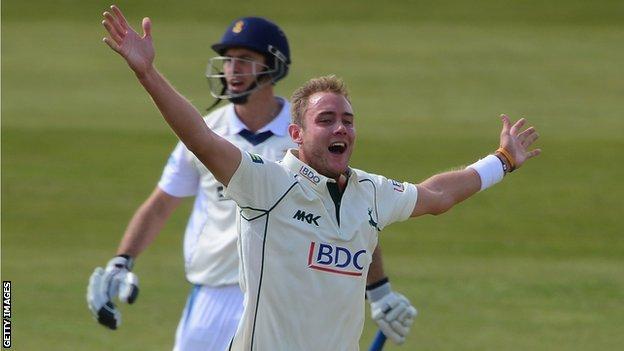 Stuart Broad looked ready for an Ashes summer as his eight wickets in the match helped Nottinghamshire cruise to a nine-wicket win over Derbyshire.

The promoted side started the day on a precarious 143-5 with 44 still needed to make Notts bat again.

But Broad found form and after breaking up Dan Redfern and David Wainwright's tough 79-run partnership ended with day's figures of 4-10.

Redfern and Wainwright ensured Derbyshire were not dealt an embarrassing innings defeat but when Redfern was trapped in front for 61, Wainwright (33) followed five runs later.

Broad was fired up after his two wickets and had Tom Poynton out lbw the ball after Wainwright.

Tony Palladino kept out the hat-trick delivery but the former Essex man was then also trapped by Broad, who ended the match with figures of 8-91.

Alex Hales nicked Tim Groenewald behind for four as Notts began the chase but Cowan (15 not out) and Lumb made no mistake.

The England opener smacked two fours off Jonathan Clare to end on 24 not out and win the match to push Notts into third in Division One.