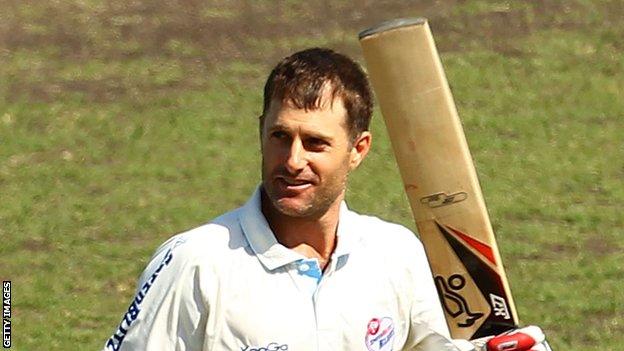 Nightwatchman Jimmy Anderson batted stoically for an hour for the Red Rose, who began on 43-2, before going for 26.

"We didn't make it easy on ourselves. The dropped catches have made it tough. Lancashire have a good bowling attack. We faced it well in the first innings, we need to bat with courage and belief again tomorrow."

Ashwell Prince (58) then struck up a 93-run partnership with Karl Brown (87) as Kent paid for dropping both.

Former Australia Test batsman Katich also had a let-off on 60 before going on to make 93 not out as Lancashire closed on 356-5, 112 runs ahead.

Kent head coach Jimmy Adams will rue the lapses by his side's fielders after Brown was put down by Mark Davies and Sam Northeast, Darren Stevens dropped Prince and Mike Powell failed to hold on to a skied Katich shot with the left-hander well set.

"It was a fabulous day for Lancashire's overseas signing Simon Katich. When he reached the amazing milestone of 20,000 first class career runs towards the end of day, Old Trafford stood to applaud him.

"He will resume on the final morning looking for a century to help the Red Rose press home their advantage.

"Set up by some patient batting in the morning, Lancashire were able to attack in the afternoon and could still force a win on the final day."

"Lancashire put themselves in a good position albeit with some help from Kent, who put down four catches that might just have changed the complexion of the match.

"It was a bitterly cold day, although the rain stayed away, in a brisk breeze which left fielders rummaging for hand warmers at every opportunity.

"The patient Karl Brown and the fast-scoring Simon Katich have given Lancashire a more than handy lead at the close that could yet cause a few anxieties for Kent on the final day."