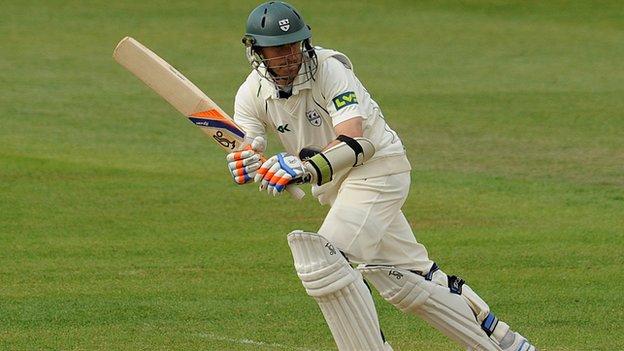 Worcestershire skipper Daryl Mitchell led an attempted rescue bid, but his team are still in danger of suffering an innings defeat against Hampshire.

Resuming on 159-5, in reply to the home side's 500-9 declared, the visitors only totalled as Danny Briggs and Sean Ervine each took two wickets.

Asked to follow on, Worcestershire then struggled again, closing on 153-5.

Despite a typically gritty 71 not out from Mitchell, his side need 141 more to make Hampshire bat again.

Mitchell in the runs

And Hampshire are within touching distance of their first County Championship win since mid-August.

Mitchell was dropped by wicket-keeper Adam Wheater off Chris Wood - but Hampshire's bowlers made inroads after the interval.

Wheater this time made no mistake when Wood this time found Pardoe's edge before Moeen Ali, the only visiting batsman to pass 50 in the first innings, was next to depart, trapped lbw by James Tomlinson.

Thilan Samaraweera then helped Mitchell dig in until tea, but his knock of 27 in 93 balls was ended by spinner Briggs and Alexei Kervezee followed soon after, bowled by James Vince, before Neil Pinner) was dismissed for the second time in the day, leaving a straight ball from Liam Dawson.

"Worcestershire at least took the game to a fourth day, but some of their batsmen are sadly off form.

"Skipper Daryl Mitchell showed stubborn resistance against a Hampshire attack that simply bowled a decent line and length and waited for the mistakes.

"Hampshire have dominated the game and only the weather can rob them of a deserved win.

"Worcestershire have problems scoring runs and there does not seem to be anyone in the wings pushing for one of the top six places."