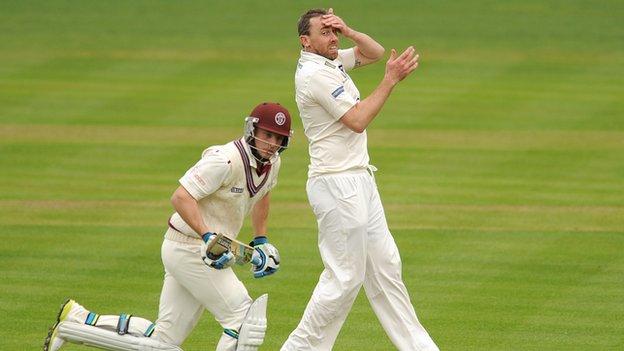 County champions Warwickshire were made to struggle against Somerset as they collapsed to 158 all out at Taunton.

The visitors recovered from a first-day battering to bowl out Somerset, 358-6 overnight, for 406, Jos Buttler finishing unbeaten on 119, while Bears all-rounder Rikki Clarke took 4-70.

But Alfonso Thomas then led the way with 3-29, backed by two wickets each for Jack Leach and Jamie Overton.

Somerset opted not to force the follow-on, closing on 46-1, already 294 ahead.

England hopeful Clarke, who took three of the four morning wickets to fall (finishing the innings on a hat-trick), then also produced the goods with the bat, top scoring with 31 before being run out by a direct hit from Marcus Trescothick.

But it was Thomas who did the damage against his old county when he ran through the middle order.

After being reprieved by Trescothick, who did not ask them to bat again, the Bears did at least prise out the Somerset skipper for 37, lbw to Jeetan Patel just before the close.

"Jos Buttler's unbeaten 119 was arguably his most important Championship contribution for Somerset so far.

"The appreciation of another encouraging Taunton crowd could be measured by the volume of applause received for the 22 year-old on reaching the landmark.

"The key bowling spell came from Alfonso Thomas, after he was switched to bowl with the strong breeze behind him from the River Tone end.

"With subtle changes of pace, Thomas accounted for Jim Troughton, Tim Ambrose and Laurie Evans to reduce Warwickshire to 86-5, from which they were never likely to recover."

"Somerset's disciplined bowling performance has established a very strong position in this match between two of the likely title contenders.

"Apparently guarding against the possibility of being caught chasing a small total on a wearing pitch on Sunday, they chose not to make Warwickshire follow on.

"Warwickshire's first innings of 158 was inadequate, a rare batting malfunction, but Rikki Clarke looked in superb form again until being needlessly run out.

"Alfonso Thomas undermined them with a splendid spell after lunch. For once, there was no lower-order rescue and the Bears will now expect to be left to bat for four sessions for a draw."