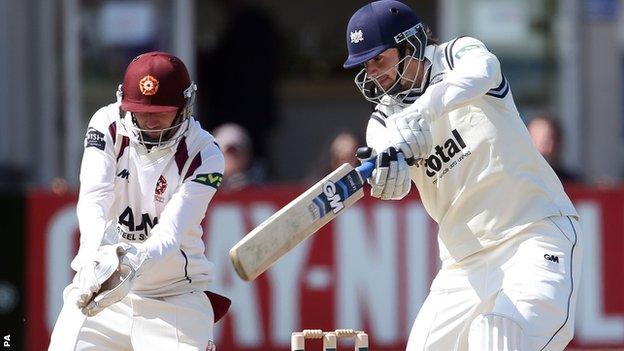 Trailing by 212 on first innings, the home side looked doomed as they slipped to 109-4, despite 50 from Chris Dent.

However, Gidman dug in to make 87 and shared a stand of 69 with Benny Howell before becoming the first victim for Andrew Hall (3-69).

Howell faced only six balls fewer than Gidman for his 56 as Gloucestershire closed on 280-9, a lead of 68.

The example of Gidman and Howell served to inspire 18-year-old debutant Cameron Herring, who underlined his potential by hitting five fours in his 32 before falling to Steven Crook (3-45).

Jack Taylor hit two successive boundaries off spinner James Middlebrook in the final over of play to finish on 30 not out.

But, unless bad weather intervenes on the final day, Northants will wrap up their second win of the summer and remain top of the Division Two table.

"This was a much better day's batting from Gloucestershire. Chris Dent early on and then Alex Gidman and Benny Howell showed resilience and made sure the game went into a final day.

"There was also another gutsy performance from young wicketkeeper Cameron Herring,, who kept the experienced Northants seam attack at bay in the final session as he and Jack Taylor ensured that the visitors would not get a Saturday off."

"It was gutsy from the home side but two late wickets for Crook mean Northants almost have this win in the bag. These last four sessions have been their most demanding so far.

"But maximum points would mean they are top and clear on 55 points - a fine start from Northants, which will be put to the test at Canterbury next week."