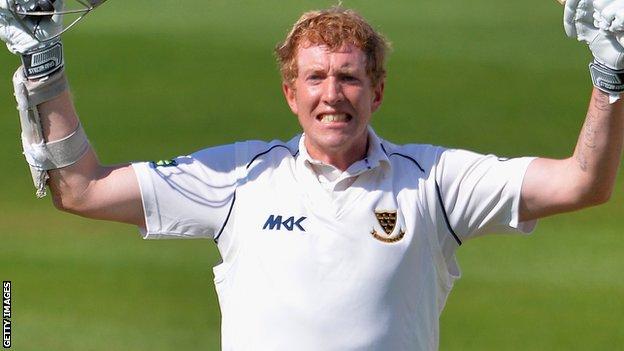 Luke Wells hit a determined 208 to hand Sussex a significant lead over Surrey on day three at The Oval.

Wells, resuming on 108 with the visitors 204-2, continued his superb form to record a new career-best score.

He shared 200 for the third wicket with Ed Joyce (98) before Matt Prior provided some fireworks with 62 off 45 balls to take Sussex to 526 all out.

Rory Burns was an early casualty for Surrey as they reached 66-1 in reply, still 109 runs behind.

Wells and Joyce had batted Sussex into a commanding position on the second evening and they continued in much the same fashion on the third morning.

The pair had just reached a 200 partnership when Joyce was bowled by Gareth Batty, agonisingly short of a century.

England wicketkeeper Prior joined Wells at the crease and soon picked up the previously serene scoring rate, reaching his half century in just 35 balls before being caught by Graeme Smith off the bowling of Jade Dernbach.

Wells's eight-and-a-half-hour 412-ball innings eventually came to an end when he was dismissed by part-time spinner Vikram Solanki, clean bowled after uncharacteristically skipping down the pitch.

Tim Linley (3-82) chipped in with a couple of wickets and Chris Tremlett dismissed last man Monty Panesar to draw the Sussex innings to a finish.

And, although Burns fell early, Graeme Smith remained at the close on 43 not out to keep Surrey in the game going into the final day.

"A magnificent double hundred from Luke Wells laid the way for Sussex to finish the third day in a dominant position.

"Surrey lost Rory Burns cheaply, but Graeme Smith used all his experience to guide Surrey to stumps with Gary Wilson.

"Smith will be there in the morning, but Surrey know there is a lot of hard work ahead of them."

"It was a terrific day for Sussex and particularly for 22-year-old Luke Wells, a model of self discipline, concentration, and excellent shot selection.

"Skipper Ed Joyce fell two short of a deserved ton, and a cameo 62 from Matt Prior off just 45 balls ensured Sussex held a healthy first-innings advantage.

"In the evening sunshine, Graeme Smith hinted at a return to form and although still advantage Sussex, a draw is perhaps the most likely result."