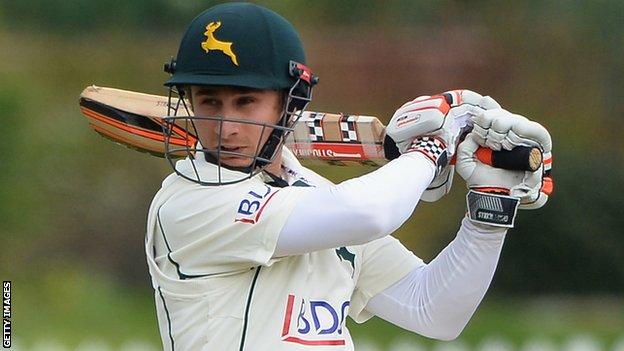 Ed Cowan made 59 before heaving David Wainwright's first ball of left-arm spin to midwicket and Alex Hales then fell lbw to Tony Palladino for 56.

Michael Lumb scored 44 but it looked like James Taylor (67 not out) and Samit Patel were headed for stumps when Patel slipped and was run out for 48.

Patience is a virtue

James Taylor took 216 minutes and 183 balls to amass his unbeaten 67; a contrast to his current partner at the crease Chris Read who has hit 27 from only 34 deliveries.

Riki Wessels edged behind soon after as Notts reached 325-5 at stumps.

After resuming on 28-0, Cowan and Hales had looked set for a big partnership after cruising through the morning on day two until Wainwright made an immediate impact, his long hop tempting Cowan into a fatal mistake with his first delivery of the match.

Hales succumbed to Palladino's medium pace after a difficult innings in which he was stuck on 18 for over an hour. His fellow England T20 international Michael Lumb endured a similarly sedate knock until he edged seamer Jonathan Clare behind after an uncharacteristic 44.

Coming together at 186-3, Taylor and Patel were in total control when the latter fell while running for a comfortable single and fielder Billy Godleman sent him packing.

Wessels lasted less than 15 minutes, nicking Ross Whiteley to the keeper, meaning skipper Chris Read had to see out the final half hour of the day with the impressive Taylor.

"It was a day when the collective proved to be more significant than any one individual innings for Nottinghamshire.

"Although a really big score escaped everyone, James Taylor will be hoping to kick on and convert his promising start.

"Runs were never easy to accumulate, yet the solid foundations laid by an opening partnership of 94 has not gone to waste."