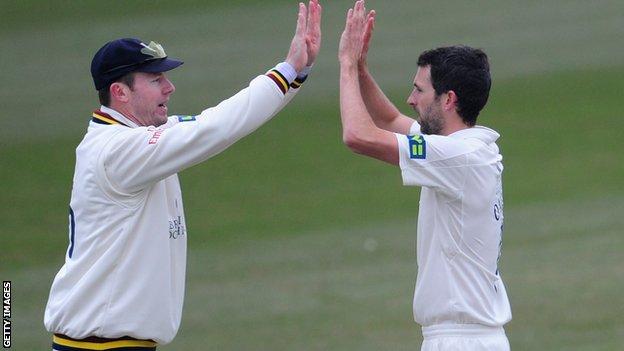 England team-mates Joe Root (49) and Jonny Bairstow (16) were among his victims after play finally got under way at 16:10 BST.

The loss of the pair in successive overs left Yorkshire on 97-5.

Liam Plunkett hit an unbeaten 25 against his former club, but Yorkshire were all out for a disappointing 177, a first-innings deficit of 60.

The loss of skipper Andrew Gale to the final ball of the first day's play meant Yorkshire would need to bat well to overhaul the home side's total of 237, but Root moved serenely on from his overnight 30 not out before being denied a half century when Onions pierced his defences to hit middle stump.

Bairstow was caught by Mark Stoneman after top-edging an attempted pull in the paceman's next over and Onions completed his five-for when Gary Ballance edged to wicketkeeper Phil Mustard, whose knock of 70 had been vital in Durham's innings.

Yorkshire's lower order did not find batting much easier, even when Onions was withdrawn from the attack, and Stokes underlined his all-round credentials with a good spell which saw him york last man Steven Patterson to finish with 3-26.

"It was challenging but we have to bat better. You have to take responsibility and to be bowled out for 177 is unacceptable," said Yorkshire coach Jason Gillespie.

"It rained for most of the day and thoughts of cricket were treated with laughter in the press room. By the time play was possible only 38 overs were left, but it took the Durham attack only 35 of those to dismiss Yorkshire and give themselves a lead ahead of their second innings.

"Graham Onions did the damage with the ball with his first five-for of the season. The rot set in when he removed Joe Root's middle stump and that led to a run of five wickets in 12 overs, with just 40 runs added.

"Ironically the day finished in brilliant sunshine with Durham poised to try and press home their advantage on day three."