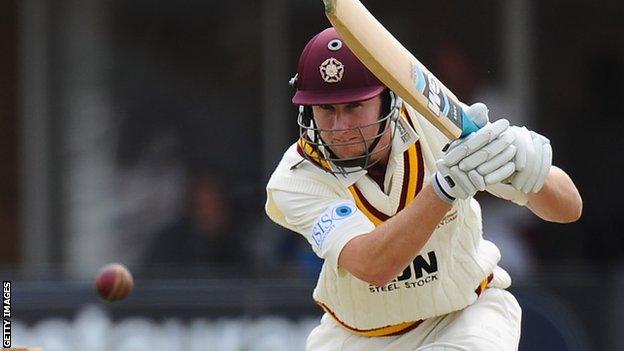 The Northants tail wagged impressively for the second successive match as they built a first-innings lead of 212 on day two against Gloucestershire.

Alex Wakely laid the foundation with a patient innings of 88 at Bristol before falling lbw to Will Gidman.

Michael Klinger then fell cheaply as Gloucestershire closed on 34-1.

In last week's match against Essex, Northants added 228 for their last two wickets but fell one run short of maximum bonus points when they were all out for 399.

They made no mistake this time, having begun the day on 107-3, as Middlebrook shared a 75-run partnership with Crook, who then added 46 with Copeland before becoming Gidman's final victim as the seamer finished with 4-109.

Faced with a sizeable deficit, Gloucestershire needed to try and avoid damage before the close, but skipper Klinger only lasted to the fourth over before edging fellow Australian Copeland to the wicketkeeper and departing for a single.

"Gloucestershire will do well to make Northants bat again - if they do, that would represent something of a success.

"Although they bowled well at times, the Northants run rate was impressive throughout and Gloucestershire will rue not getting nearly enough runs on the board in their first innings."

"Northants should complete a second-successive innings victory on day three. They lead by nearly 200 and have already removed the dangerous Michael Klinger.

"A win would be worth a maximum 24 points and a great reward for teamwork as every player will have contributed during this match.

"Alex Wakely's chanceless innings set the tone on day two, even though he failed to convert to 100 again, and with Middlebrook and Crook backing him up, Northants are leading the way in the early part of the season."