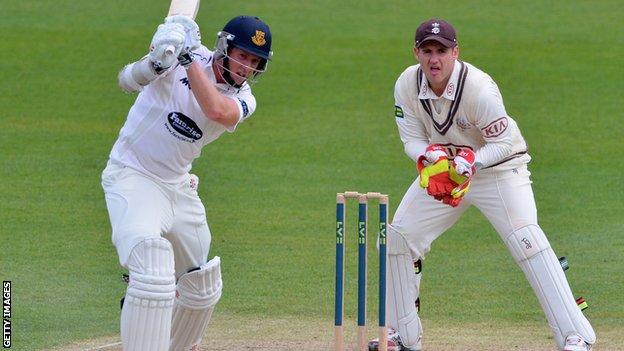 Luke Wells hit an unbeaten 108 as Sussex reached 204-2 on an attritional second day at The Oval.

Resuming on 301-7, Gareth Batty and Chris Tremlett went on to share a stand of 61 to help Surrey towards a total of 351, with Chris Jordan taking the final three wickets to finish on 5-92.

He and Joyce shared an unbroken 104 to leave Sussex 147 behind at the close.

Having seen four wickets fall for just 30 runs on the previous evening, the hosts would have been hoping for some tail-end resistance and it was duly provided by Batty (37) and Tremlett (34).

But once Batty was caught by Wells off the bowling of Jordan, the former Surrey man wasted little time in finishing off the tail to pick up his second five-wicket haul of the summer.

Tim Linley trapped Nash leg-before as the visitors suffered an early wobble, but Yardy and Wells put on 78 for the second wicket to steady the ship.

And although the former was caught at leg slip by Rory Burns off the bowling of Batty just before tea, Joyce joined Wells at the crease to bat through the final session, with Wells bringing up his century - a third in succession against Surrey in Championship cricket - in the final half an hour of the day.

"It was another day of hard-fought cricket as Luke Wells recorded his third consecutive Championship hundred against Surrey.

"The Surrey bowlers showed great discipline throughout the day and a new ball will be available first thing on the thirdmorning. It will be a crucial first hour of play for both sides."

"A good day for Sussex, and particularly 22-year-old opener Luke Wells, who was patient throughout and showed excellent judgment outside the off stump, while waiting for the loose deliveries, and his hundred was richly deserved.

"Surrey felt a couple of umpiring decisions did not go their way, but Wells, who considers he is the most sledged county cricketer in England, was completely unruffled.

"Sussex skipper Ed Joyce shared an unbroken stand of 104 with Wells, and his experience against the second new ball will be vital in the morning as Sussex look to build a first-innings lead."