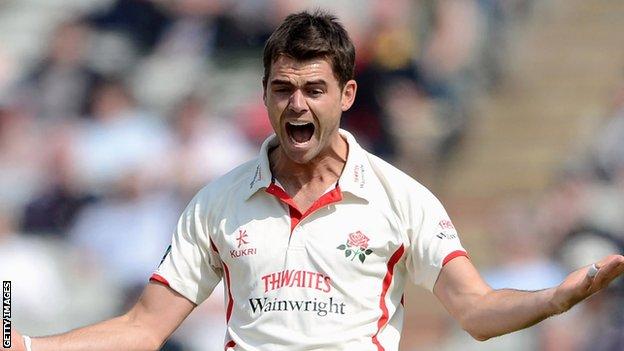 Lancashire bowler James Anderson mopped up the Kent tail, before rain disrupted day two of the game at Old Trafford.

England paceman Anderson (4-57) proved too much for Kent, taking the wickets of Mark Davies and James Tredwell (40) as they ended on 244.

But that was the last meaningful action as rain prevented all but a few overs of play after lunch.

Kent skipper James Tredwell told BBC Radio Kent: "It was frustrating watching the rain, but we had them under pressure taking the wicket before lunch.

"Once play started again we could put them under pressure for a short spell and we got the second wicket."

"The players left the pitch just as the sun came out on a frustrating day at Old Trafford.

"The day started well, it took the Red Rose and James Anderson in particular just 20 minutes to polish off the Kent tail - the England bowler looking in excellent touch with four wickets in the innings.

"It was a shame for Paul Horton as he misjudged one and saw his off stump knocked over after showing great patience to try and bat the day out."

"It's still finely balanced at Old Trafford in what seems destined to be a low scoring match that could still go either way. Four hours were lost to rain and close of play eventually arrived in bright sunshine.

"A fiery spell from Matt Coles gave Kent the impetus once play had finally restarted at 17:30. He removed Paul Horton's off peg with one that the Lancashire opener misjudged as going wide, shouldering arms, then looking back sheepishly to survey the damage."