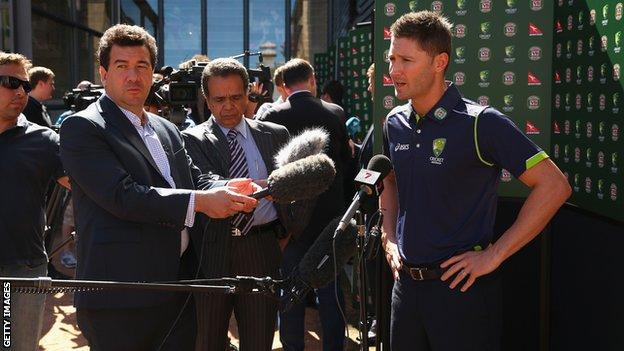 Cricket Australia chose the old Sydney Mint to unveil their squad for the Ashes, a 19th Century venue with some inadvertently negative symbolism for the Aussies.

The Baggy Greens are no longer the gold standard in the global Test arena, and the building hails from an era when the Poms were very much in charge.

Australia have not won an Ashes series on English soil since 2001, and after back-to-back defeats, home and away, fans here know they go into the forthcoming series as underdogs.

When the Test greats Steve Waugh and Mark Taylor appeared at the news conference, there was gallows humour from the Aussie cricket press pack. "You been recalled?" asked Peter Lalor of The Australian.

But the pair's presence was deliberate and meaningful - they were both members of the 1989 squad which was written off as one of the worst to leave these shores.

Under the leadership of Allan Border, they ended up returning to Australia with the Little Urn.

The return of veterans proved to be the theme of the day for the Australian press, after 35-year-old wicketkeeper Brad Haddin returned as vice-captain and 35-year-old batsman Chris Rogers was included, five years after playing his first and only Test.

Leaked beforehand, Haddin's replacement of Shane Watson, the vice-captain suspended during the recent Indian tour as a result of "Homeworkgate", did not come as a surprise. The return of Rogers raised more eyebrows, however.

"Australia turns to veterans to plug the experience gap for Ashes" was the headline on the Sydney Morning Herald's website. Rogers' unexpected return was also the top line for The Australian and the Sydney tabloid, The Daily Telegraph. "WOW," was the response of Chloe Saltau of the Melbourne Age.

After a long and successful career in Sheffield Shield cricket, the bespectacled opening batsman made his debut against India in Perth in 2008. But, after scoring just four and 15, he was dropped. However Australian cricket writers were quick to point out his strong record on the county circuit in England with Derbyshire, Leicestershire, Northamptonshire and, most recently, Middlesex.

As Brydon Coverdale of ESPNCricinfo noted, Rogers has scored 9,375 first-class runs in England at 54. The England captain Alastair Cook has 9,107 at 45. "Chris Rogers an Ashes must given Aus batting stocks," Coverdale tweeted.

The batting is much weaker than the bowling, a fact widely acknowledged here. In its live blog of the Ashes squad announcement, the Sydney Morning Herald compared the batting averages of the English top order with the Australian. Its one-word conclusion was "Yikes."

There is more confidence in the fast bowling department though. Mitchell Starc, James Pattinson and Jackson Bird are promising, if a tad injury-prone. Peter Siddle is a proven performer and has become the mainstay of the attack. The 26-year-old newcomer Bird, who bowled brilliantly against South Africa during the southern summer, could emerge as a star of the series. Already he is being compared here with a young Glenn McGrath, and English conditions should suit his metronomic style of bowling.

Of more concern is the paucity of spinners. On the eve of squad announcement, Australia reached a new population landmark of 23 million people. But, as one wag put it, Australia still cannot find a spinner to replace Shane Warne.

According to the ABC's veteran commentator Jim Maxwell, "There's tremendous strike power," but a "real dearth of spin bowling about the place". As for the batting, the fact that veterans like Haddin and Rogers have been recalled highlights how younger players like Watson have not yet achieved their potential.

Absent from the squad, obviously, are the recent retirees Ricky Ponting and Michael Hussey. So this is very much a new-look squad for England fans. "Many of these players will require name tags," joked Lalor. But some of these players are relative unknowns in Australia as well.

It is probably correct to describe the reaction of the Australian cricket press as "realistic". Although during the home series with South Africa, the Baggy Greens came close to reclaiming the number one spot in the ICC world rankings, this does not have the feel of a world-beating squad.

"Best available," tweeted Lalor: "Suggest a lot of clever planning failed, that there are no batsmen coming through and times r hd."

"Sobering to think that this is our best squad," noted Greg Baum of The Age. "Still, 1989 is long enough ago to be history, and so ripe for repeating."

What happened in 1989 gives home fans hope. So does England's recent performance in New Zealand, from where they only managed to escape with a draw. But Australia's dismal performance in India, where the team slumped to a humiliating 4-0 series defeat, has heightened the sense here that Australia is still reeling from the retirement of its generation of legends: Warne, McGrath, Gilchrist, Hayden and Langer.

At the Sydney Mint this morning, there was an overwhelming sense that Australian Test cricket is still in recession.