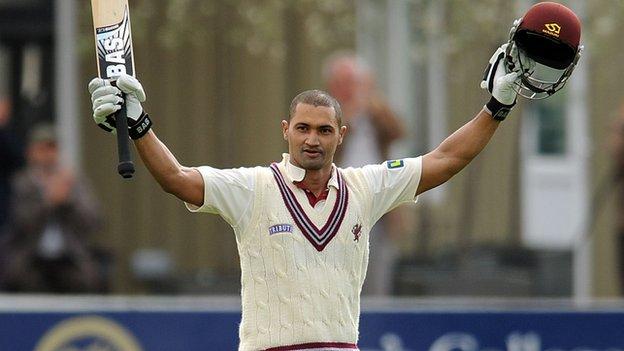 In-form Alviro Petersen hit his second century in as many games as Somerset dominated the first day against county champions Warwickshire at Taunton.

After snapping up openers Nick Compton (52) and Marcus Trescothick (51) just before lunch, the Bears had hopes of a recovery after losing the toss.

Another Petersen in headlines

But, after Trescothick missed spinner Jeetan Patel's first ball to be given out lbw, in the next over Rikki Clarke hit Compton's pads and the Bears won that appeal too.

Chris Woakes then struck straight after lunch when he had James Hildreth caught by Ateeq Javid, a late replacement for Ian Westwood, who ruled out after turning his ankle in training.

Chris Wright then got in the act, having Craig Kieswetter caught in the slips for a 17-ball duck.

But it was another three hours before Wright struck again when he finally found Petersen's edge late in the day.

Apart from a spell either side of lunch during which Warwickshire took their first four wickets for 40 in 12 overs, Somerset's batsmen dominated.

But, after coming back on following a short break for bad light, Woakes did prise another wicket when he had Peter Trego brilliantly caught behind, high, one-handed by Tim Ambrose.

"Marcus Trescothick's decision to bat first was debated at the time but shown to be correct - the green-tinged pitch played beautifully throughout and early cloud cover quickly disappeared.

"There have been few occasions in recent times when Warwickshire's attack has been blunted, but it was here. And several batsmen, Trescothick among them, might well feel they didn't make the most of the opportunity.

"Chris Woakes was the most accurate of the seamers, bowling with good pace. Those monitoring his prospects as a future England all-rounder will note that he is listed to bat at number six in the published line-up for this game.

"The late dismissals of Alviro Petersen and Peter Trego against the new ball give Warwickshire a chance of limiting the damage in the morning, but Somerset will surely still want at least 450."